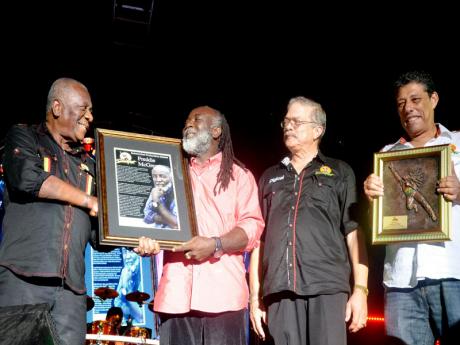 Summerfest Productions, the organisers of the annual Reggae Sumfest festival, have expressed satisfaction with this year's staging of the event, claiming that its three live-performance nights reaped significant success at the Catherine Hall Entertainment Complex in Montego Bay, St James.

"We had yet another successful staging," chairman of Summerfest Productions, Godfrey Dyer, told The Sunday Gleaner. "All three nights were well attended ... . We went out to have a good show, and we did."

According to the chairman, the festival, which completed its 22nd staging on Saturday, July 19, with International Night Two, on which reggae icon Freddie McGregor was also honoured for his stellar contributions to Jamaica's music, met all expectations. "I think we have fulfilled all our major expectations," said Dyer.

"Firstly, we wanted to have a crime-free show, and we did. Next, we wanted to have a show that satisfied everybody, and this is why it was packaged the way it was, and the feedback that we've been getting has been very good, and though we haven't had our final count yet, the turnout at all three nights looked very good," added Dyer.

But the organisers are not the only ones left feeling satisfied. Major sponsor Iberostar Hotel, which has been with the festival since its doors officially opened for operations in 2008, has already confirmed its support for next year's Sumfest staging, due largely to a steady increase in bookings for the period.

"All three nights were fantastic and Iberostar was happy to be on board once again!" said the resort's sales and marketing manager, Tamika Higgins-Baker. "We are really looking forward to what they are going to come with for 2015. We are indeed excited about that."

Higgins-Baker added, "Outside of us partnering as sponsors, Sumfest is a big pull for other group tours... . There's a particular group that comes every year, and each year it increases. This year, they had over 100 rooms, so the international exposure of this event is still garnering positive support from overseas."

Despite the high levels of satisfaction coming from Summerfest Productions and some of its sponsors, there were others who believed that the festival, in particular, Dancehall Night, was losing its appeal, largely because of a poor line-up of artistes.

Speaking on this, Dyer contended that the booked-out status of hotels in and around the Second City for the Sumfest period is testament to the substance of the show's productions over the years, adding that he felt this year's line-up was one of the best yet. "We had a large number of tourists there, and we are certainly pleased. Check with the hotels. Everyone would tell you they were full, and not just full with Jamaicans, they were full with tourists ... . We continue to have good support from overseas," said Dyer.

"They would have to single out and tell us why because we believe this year, the line-up was even better than last year. I haven't heard ... anyone who said the line-up wasn't good," Dyer added.

As live Internet streaming is the growing trend in the hosting of major international music festivals, Dyer confirmed that this could be the next possible step for upcoming editions of the summer festival. "We continue to look at ways and means to be better, so that's something we are looking at and will continue to look at," he said.