Are we falling behind (again)? 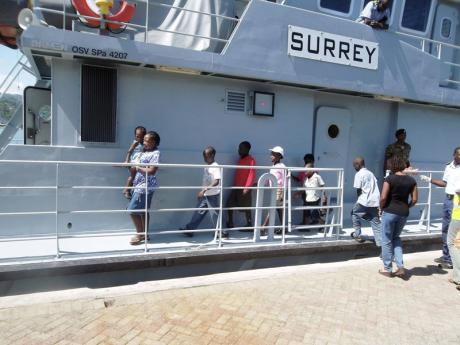 Haitians who arrived in Portland board a Jamaica Defence Force Coastguard vessel for repatriation. Notice how long since Haitian boat people have washed up on Jamaica's shores? Perhaps Jamaica is no longer ideal for refugees, Tony Gambrill muses. - File

Forty years ago, I accompanied an exhibition of Jamaica-manufactured products to several West Indian islands. The late Edgar Stewart skilfully designed a standard display unit for each participant that fit snugly inside a DC-3 aircraft. I sat on a box of Red Stripe between the pilot and co-pilot.

At every stop - including Trinidad before oil - we drew crowds curious to see how advanced Jamaica was. I still remember a man in Antigua telling me that he thought of King Street as the (New York) Fifth Avenue of the Caribbean. Everybody came back with orders for their products and left behind the impression that Jamaica was the leading economy in the West Indies. That was before the cry was 'better must come' and we began borrowing ourselves into bankruptcy. What fi do?

One of the saddest realities of the 21st century is the swelling ranks of refugees. Their numbers have never been greater; Latinos die of exhaustion trying to reach America; Africans drown on unseaworthy craft crossing the Mediterranean; The Middle East conflict is driving thousands of families out of their homelands; Haitians are trying to reach the islands of The Bahamas.

I don't know if you realise that the Haitians who used to regularly arrive at Manchioneal have stopped coming (except, perhaps, those who are still bringing guns to exchange for ganja). We are no longer a destination for economic refugees - even Haitians - perhaps because we ourselves are largely a nation of economic refugees with nowhere to go.

Peter Phillips, Christine Lagarde, and others are trying to do something about the economy, but it will take years to turn it around so that more than just a few benefit. I am afraid I don't have much to contribute, but it strikes me that what we aren't doing is getting the world's attention often enough. Drawing attention to Jamaica and to Jamaicans can do a lot for our economy, and I don't mean just tourism. It looks like Usain Bolt and Tessanne have run their races (in Usain's case, 'shot his bolt', so to speak). Chris Gayle is here today, gone tomorrow. And don't even mention the Reggae Boyz! We need to grab a few new headlines.

For instance. I am sure Vybz Kartel won't object to assisting the Palestine-Israel peace process. We could offer to settle the people of Gaza in our Gaza in Waterford (formerly known as Borderline). It was Vybz who said (about the folks in Palestinian Gaza), "Dem people deh serious and dem nah back down." Gaza is now the name for impoverished urban areas like ours, but at least the Israelis aren't shelling us yet. And we would use a few more people who nah back down.

Speaking of the military, we haven't sent the Jamaica Defence Force (JDF) anywhere lately. In the past, they were deployed in Haiti and, I think, Sierra Leone. That was always good PR - as long as someone else paid the expenses. I am sure the cooperative Brits would appreciate having the JDF available to patrol the streets of Gibraltar.

Being helpful on the world scene always gets you favourable headlines and gives foreigners a feel-good buzz when they are planning their next holiday. Here's an opportunity that is, as they say, a win-win situation. Countries like Denmark, Switzerland and Japan are seriously concerned about their declining birth rates. What better way of improving our image by offering to lend them an unending supply of testosterone-fuelled young Jamaican men? This will require redefining the term 'sex worker'. It will, of course, as the comedian Charlie Hyatt once said about the West Indian immigrants in the UK, "darken their future".

We haven't been able to aspire to world leadership in anything since the death of Michael Manley, it's sad to say. But now with the relentless cass-cass over homosexuality and our buggery law, here is our chance.

Jamaica can seize the initiative and hold the world's first anti-buggery conference. This, of course, would result in the formation of an association of anti-sodomites under Jamaica's leadership. We can regale such an august gathering with video footage of homosexuals living in drain pipes, for instance. And how about a fashion show of transvestites to show how far this thing can be taken? A testimony by an ex-homosexual would be an attention-getter, and with luck, we might be able to find two gay men who got married but are now divorced. Wow! That would be a strike against anal sex for consummating marriage.

But surely, this is the time for protest. Remember the lady on television demanding, "We want justice"? She disappeared off the radar pretty quickly, but why hasn't her message lived on? She could have become such an ugly thorn in the side of the Establishment that she would have had to seek refuge in a foreign embassy, claiming to be a political refugee afraid for her life in her own country.

That would surely be a headline-grabber and should match the publicity being earned by WikiLeaks' Julian Assange enjoying the hospitality of the Ecuadorian Embassy in London, and Edward Snowden, the man who has given away NSA's secrets, a reluctant guest of the Russian government.

Anthony Gambrill is a playwright and author. Email feedback to columns@gleanerjm.com.