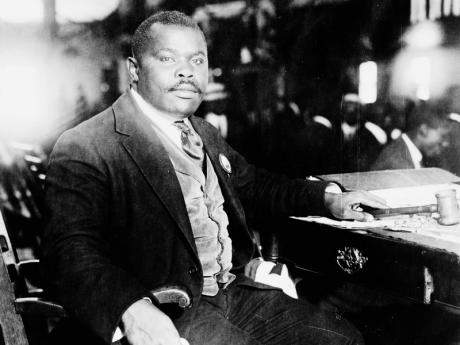 There were no marches in the streets in full and fancy imperial 'military' regalia. There were no mass meetings with fiery orators stirring thousands to pride and, hopefully, to action.

The 100th anniversary of the Marcus Garvey-founded United Negro Improvement Association would (UNIA), in all likelihood, would have gone unnoticed and unremarked had not a few media houses brought the matter to our distracted notice. Garvey himself was a substantial media man as journalist, printer and publisher, and he keenly understood the power of mass media for causes and how to use that power.

One media story told us that the mostly invisible residual Kingston Division of the UNIA, in collaboration with the Ministry of Culture, will be marking the centenary milestone with a number of activities. And the vestigial UNIA will be humoured by inclusion in the Emancipation Jubilee in St Ann. The Jubilee at Seville on August 1 will be staged close to the shamefully neglected birthplace in nearby St Ann's Bay of the 20th century's greatest black man and our first named national hero.

After Edward Seaga's push as minister of development and welfare with responsibility for culture for the recognition of Garvey as a national hero and for the repatriation of his remains from a cemetery in London, where he had died at the young age of 53 in 1940, the stance of the Government of Jamaica on Garvey and Garveyism has been defined mostly by lippy neglect.

The UNIA, now long a spent force, was founded in Kingston on July 20, 1914, by an already well-travelled 27-year-old Marcus Garvey, with Amy Ashwood, who would briefly become Garvey's first wife, as the first member. The first meeting was held at 121 Orange Street.

Incidentally, the name of the association is one of the few remaining places where the perfectly good word 'negro' can still be used without being politically incorrect. The US National Association for the Advancement of Colored People (NAACP) faces, like the UNIA, the same crisis of identity, purpose and politically correct nomenclature. The world - and black people - have moved on.

By 1920, a mere six years after the founding, the UNIA was claiming up to four million members, making it the largest international, transcontinental organisation of people of African origins ever. The UNIA's international convention in 1921 at New York's Madison Square Garden pulled some 50,000 people.

Garvey wrote in 1920: "It was thought impossible for the Negro to organise for any definite purpose, but it is an acknowledged fact today that the UNIA has done the impossible in the space of two and a half years [of organising in the United States]. We have been able to organise three and a half million men and women of our race with a definite plan; the plan of a redeemed Africa; the plan of a free race."

This movement, Garvey boasted, "has already swept the world and we have put the world in confusion. We have caused more of the chancelleries in Europe to be speculating now about the future than any other movement outside of the Bolshevik of Russia. When they turn their eyes from Lenin and Trotsky, they turn them to the UNIA. But thank God, we are not Soviets, we are the Universal Negro Improvement Association and African Communities League".

Garvey detested communism, an inconvenience for then Marxist and always fine Garvey scholar Rupert Lewis, who wrote Marcus Garvey: Anti-colonial Champion, with a chapter devoted to the conflictual relationship between 'Communism and the Garvey Movement'.

Garvey was quite clear about the purpose of his UNIA. The Negro World, the association's newspaper, and the public speech were Garvey's platforms for powerfully spreading the ideas of the UNIA. At a time when black people were second-class citizens and non-citizens everywhere, including in Africa under European colonial masters, the UNIA was founded, Garvey said in 1915, "for the purpose of helping to raise the people of our race to a higher state of appreciation among the more progressive races of the world".

Later on, he explained: "The Universal Negro Improvement Association is striving for freedom and manhood. All the world is striving for the same things. The UNIA is also desirous of building up a republic in the fatherland."

The man who guided the establishment of the Black Star Line shipping line and the Negro Factories Corporation declared that the UNIA "stands for the economic, industrial, commercial, social and political liberation of the Negro peoples of the world. It stands for a free and redeemed Africa".

Marcus Garvey and the UNIA had enormous global impact. Jomo Kenyatta, the first prime minister and then first president of independent Kenya, tells how in the 1920s, illiterate Kenyan nationalists would gather round a reader of the Negro World and listen to an article read two or three times, and then they would run through the forests to their villages to repeat the whole thing which they had memorised.

Kwame Nkrumah, first president of independent Ghana, confessed: "The book that did more than any other to fire my enthusiasm was Philosophy and Opinions of Marcus Garvey." Garvey's own country is still thinking and talking about teaching the philosophy and opinions of its own son, one of the world's great philosophers, who was also a monumental man of action.

While on Marcus Garvey's home soil in Jamaica in 1965, Martin Luther King Jr praised Garvey "as the first man of colour in the history of the United States to lead and develop a mass movement. He was the first man on a mass scale and level to give millions of Negroes a sense of dignity and destiny and make the Negro feel he was somebody".

Ken Jones has in his book, Marcus Garvey Said ... , a section in which Garvey speaks about 'Negro Weaknesses'. "The Negro fights himself too much. His internal conflicts constitute the puzzle of our age ... . Every other day he is smashing up what he has made," Garvey lamented.

And two years before his death, a worn-out old man just past 50, Garvey wrote: "The monumental disgrace of the Negro race is that wherever it finds itself, it is more occupied with fighting and destroying its own institutions than in seriously helping to bid them."

CRIED OUT IN DESPERATION

Contrary to the popular view that Garvey was issuing a triumphal command, it was in despair over these 'weaknesses' that he cried out in desperation, "Up, you mighty race! You can accomplish what you will."

History has made the UNIA, like the NAACP, redundant. The colonial empires of Africa have been dismantled. Ghana led the way in Black Anglo-Africa in becoming the first independent state in 1957. Other states have won their wars of liberation. The Organisation of African Unity (now the African Union) emerged in 1963, which could lead the destiny of the continent, except for reflecting so many of the 'Negro weaknesses' about which Garvey complained. The Caribbean colonies have achieved independence and have formed their own Caribbean Common Market. The civil-rights movement in the United States has removed legal handicaps from American blacks.

Malcolm X, whose father was vice-president of the Detroit chapter of the UNIA, has noted: "It was Marcus Garvey's philosophy of pan-Africanism that initiated the entire freedom movement, which brought about the independence of African nations. And had it not been for Marcus Garvey and the foundations laid by him, you would find no independent nations in the Caribbean today ... . All the freedom movements that are taking place in America were initiated by the work and teachings of Marcus Garvey."

Negro populations in Africa and the African diaspora have achieved substantial political liberty in dozens of black-dominant nation states, and increased social standing as minorities in other states, and must now get on with the business of economic development, taking Garvey's advice: "Develop yourselves into a commercial and industrial people, and you will have laid the foundation for racial greatness."

In the situation of the 21st century, the UNIA is simply not a satisfactory vehicle for this enterprise. Its enormous contribution to black liberation, black uplift and black pride must be honoured and never forgotten. But its moment of history has passed. And forestalling out of sentiment its inevitable demise after a long and painful decline, which began with Garvey's death, is neither kind nor sensible.

It is Garvey's teachings that must be kept alive and lessons learned from his achievements and failures, his wisdom and folly, his strengths and weaknesses. Not his time-up organisation.