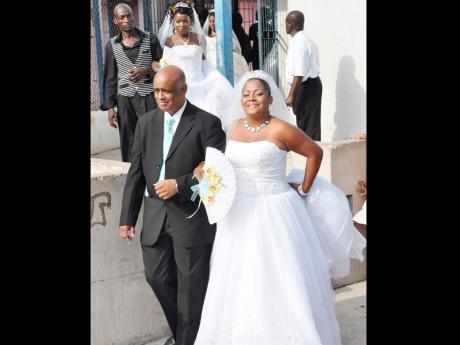 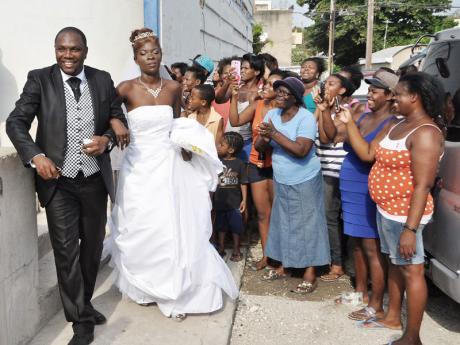 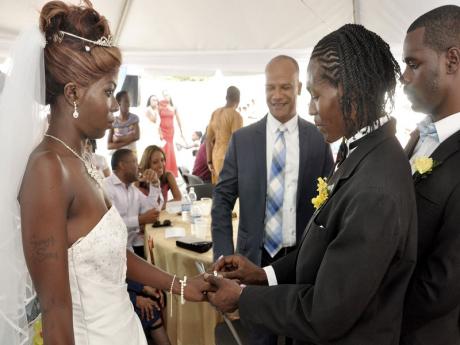 Steadman Wilson (right) places a ring on the finger of his bride, Sania Israel, during the first staging of a community collective wedding in McIntyre Villa, better known as 'Dunkirk' yesterday.
1
2
3

Less than six months ago, guns were barking in the East Kingston community of McIntyre Villa, better known as 'Dunkirk'. At that time, residents were attending funerals in large numbers as criminals in the community turned their illegal guns on each other. Not even the children were speared.

But yesterday it was all about love as a large crowd turned up at the McKintyre Villa All-Purpose Sports Complex to celebrate with eight couples who were married in a community collective wedding under the aegis of Encounter Ministries International (EMI).

The police were also out in large numbers celebrating with the couples in the community where they once entered with high-powered weapons on the ready.

For the residents, the anger that marked the violence at the start of year was replaced with joy as they peered from their balconies, and other vantage points, taking pictures as the brides and grooms walked up the aisle on the red carpet that was rolled out for them.

Member of parliament for the area, Phillip Paulwell, expressed pleasure at the efforts of the residence to restore normality to their community.

He told The Sunday Gleaner that the mass wedding was as a result of combined hard work by members of the community and other interest groups.

"A lot of progress has been made since the Unite for Change walk in the community after the violence. It took a lot of effort to reach today's happy occasion," said Paulwell.

"Since the walk, and the involvement of the churches, there has been 50 baptisms. So it is a happy occasion for me and the community. It's a work in progress, and each day we try to take it a step further," added Paulwell.

His colleague, Cabinet member National Security Minister Peter Bunting, who was in the crowd, praised the security forces for their tireless work in Dunkirk.

"The residents have to be congratulated and no praise is too high for the security forces. They have worked tirelessly with the community and the churches," declared Bunting.

"It's a positive trend which needs to be sustained and we hope it yields sustainable results. It's a huge effort by community, church and security officials who have all played a critical role and all effort will be made to try and keep it together," Bunting promised.

For Pastor Munroe Allen of EMI, the mass wedding was a happy occasion. According to Allen, this was part of God's plan to unify hearts and bring people together.

He noted that not all the persons who got married were members of the EMI as some worshipped at other churches, but there was no denominational distinction as they all said, "I do".