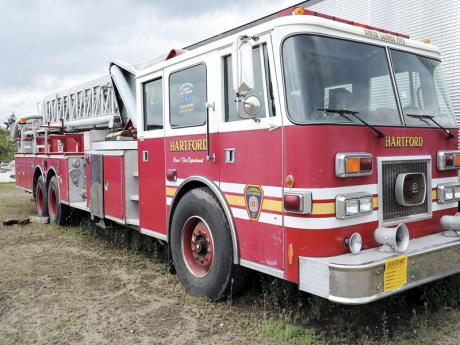 The fire truck donated to Morant Bay by the Hartford City Council, now at the fire station in Portmore, St Catherine.

Six years after a fire truck donated by the city of Hartford, Connecticut, to the St Thomas Parish Council arrived in the island it remains parked and out of use at the Portmore Fire Station in Waterford, St Catherine, despite the critical shortage of equipment, including trucks, for the local fire service.

The truck - which was the focus of an international investigation after a series of misunderstandings which threatened the reputation of one of the principals at the heart if the donation - has been parked since it arrived in Jamaica, and last week Sunday Gleaner sources claimed that it is "old and of no use to the country except for training purposes".

"What it would cost to rehabilitate it to make it roadworthy is too much, and in my judgement, it was not worth it," said one source in reference to the truck that is an exceptionally long unit with initial concerns over its weight and length on the small roads in the rural town.

However, communications officer of the Jamaica Fire Brigade, Emilio Ebanks, refused to comment on this claim, while confirming that the truck is parked at the Portmore Fire Station.

"I can only tell you where the truck is located. I know that because I saw it there last week. But speak with Assistant Commissioner Errol Mowatt or Warren Malcolm for further information," said Ebanks. Efforts to contact the two have so far been unsuccessful.

The truck has been a source of contention since the day it arrived in Jamaica as local authorities scrambled to see how best it could be used.

At that time, the then minister with responsibility for local government, Robert Montague, said the National Works Agency's Inspectorate Department deemed that the truck could not be accommodated in Morant Bay because of its weight and length.

Montaque added that the Airports Authority of Jamaica said the truck was unsuitable for airport operations but it could be parked at the Boscobel aerodrome and used for patrolling services on the highway.

It was later decided to use the truck with its 100-foot ladder for training at Twickenham Park, but it appears that the vehicle has never left the Portmore Fire Station.