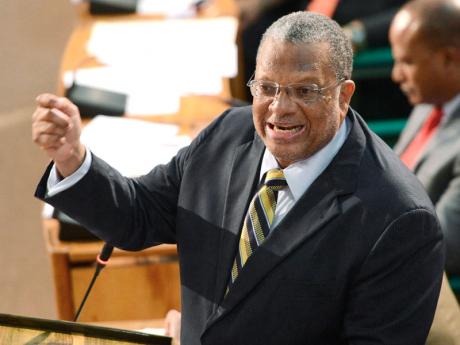 Two new tax acts are being rushed through Parliament again, the Tax Collection (Miscellaneous Provisions) Act and the Tax Penalties (Harmonisation) Act which are set to come into force by August 1.

Today, we will focus on the Tax Collection (Miscellaneous Provisions) Act.

The act is as bold, as it is alarming, and will have far-reaching impact especially on lower income and middle income Jamaicans, including small business persons whose sole vehicle of incorporation of their businesses is that of registration of a business name.

This is because the act creates enforcement mechanisms for the tax authorities, which, while not novel in concept, are very novel in execution. The act will weigh more heavily on individual tax debtors than companies as the former are not shielded by the vehicle of "limited liability incorporation status" which separates the debt of a company from that of its shareholders as these two are regarded, in law, as having, "separate legal personalities".

Garnishing of monies due to tax debtor

Under the Act, where the "tax czar (the commissioner general)" knows or suspects that a person holds, controls or has custody of money belonging to a tax debtor (defined as one who owes an amount in respect of any tax, penalty or surcharge) or is, or will be liable, within a year, to make a payment to a tax debtor, then the tax czar may require that person to pay the money due to the tax debtor to the commissioner general.

The fact that the act circumscribes the types of monies that may be levied will provide little solace to tax debtors, as not much is left out. "Monies" is defined as including rent, dividend, "remuneration (which would include salaries)" annuities or any other periodic payments.

Failure of the person receiving the request from the commissioner general to make the payment as requested, will render that person personally liable for the payment in question. The Act further expressly provides that the Government is included within the scope of the provision regarding garnishing of remuneration and as such, monies due from the Government of Jamaica to a tax debtor. This begs the question if, for example, pension payments could also be garnished.

This is a bold provision because it cuts out the need for court process before monies due to a debtor could be garnished. This will make it much easier for the tax authorities to collect taxes owed and so may become a first resort for them and a nightmare for small business persons, who, unable to turn a small business into a profitable enterprise, must now face the horror of seeing their other sources of income disappear without an opportunity to put up a fight or employ delaying tactics as they may have done in the past.

Nevertheless, desperate times call for desperate measures and one can hardly fault the Government for opting to go along this route.

The Act also empowers the tax czar to have a certificate in respect of taxes owed by a tax debtor, registered in the Supreme Court. The certificate, upon registration, will then have the force of an order of the court. Again, this cuts out the usual court process that would have obtained before a judgment was handed down in the Supreme Court (on average, reducing the process by three to five years).

The certificate, once registered, may then be filed with the Office of Titles or other prescribed agencies, in as much the same fashion as a judgment obtained now, or a writ of execution, could be treated, and in so doing, a charge, lien or priority is created on the property, interest or right of the tax debtor.

The act appears to provide a consolation of sorts for tax debtors, by providing that the commissioner general's enforcement options, outlined above, may only be resorted to where the debtor has acknowledged the debt, by for instance, filing an annual return. This is an illusion, however, a mere chimera, as failure to file an annual return in a timely fashion will itself prove a costly mistake, resulting in the defaulting tax payer incurring a penalty of $5,000 per month until the defect is cured.

Constitutionality of the Act

While I have not had the benefit (having only looked at the charter before writing this column) of the intensive analysis that Audley Shaw, the opposition spokesman on finance, has indicated his legal team will be subjecting the Act to, from my cursory review, it does not appear that the provisions regarding garnishing or imposition of liens breach the Constitution.

Furthermore, the charter expressly provides that nothing in Section 15 — which is the section which guarantees the right to protection of property — "shall be construed as affecting the making or operation of any law so far as it provides for the taking of possession or acquisition of property in satisfaction of any tax, rate or due".

The provisions of the act regarding garnishing and liens, being a part of legislation geared at satisfying, a tax debt, would, in my opinion, fall squarely within the proviso to Section 15 of the charter, and as such, not be unconstitutional.

One thing that is certain, however, is that come August 1, 2014, it will not be business as usual for tax debtors in Jamaica.

Editors note: The Ministry of Finance has since announced it has decided to move an amendment which will ensure that no lien could be registered without a specific order of the court.