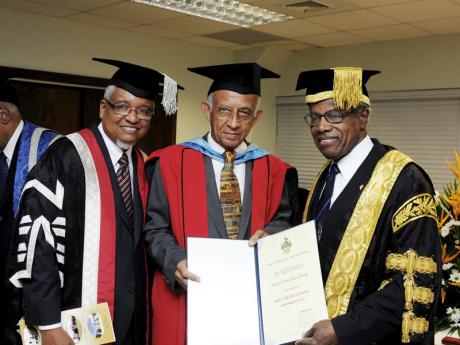 Retiring Vice-Chancellor of the University of the West Indies, Professor E. Nigel Harris, would have given anything not to have to deal with the Professor Brendan Bain controversy at the tail end of his outstanding 10-year-stint in the post.

Harris and Bain are not only friends, they are respected academics and Eastern Caribbean men - Harris, Guyanese, and Bain, Trinidadian.

In a recent exit interview, Harris expressed regret at the issue which is now in the courts, and the hope that his tenure as vice-chancellor would not be defined by the issue which has put a strain on the friendship and camaraderie the two outstanding academics shared.

"I made a decision to leave quite some time ago. I talked about it with the chancellor. I was coming to the end of my 10th year, and I believe that after one has been head of an organisation for 10 years, it is time, perhaps, for a change to take place.

"I have had a wonderful time as vice-chancellor. Our student population grew form 24,000 to 50,000; our revenue doubled, although we have troubles, because governments are not paying; our infrastructure has enlarged considerably, but despite the challenges, this has been a good time for the university," Harris told The Sunday Gleaner.

"Quite frankly, I did not expect this (Bain controversy) happening within two weeks of my announcement that I was leaving. So, I made my announcement in a joyful moment, and for this to happen in the last several months of my tenure is obviously something that I am regretful about," added Harris.

According to Harris: "It's something that I am sorry about, because how I see the university, is that it's a place where people can agree to disagree, but where there is a space where people can feel safe, speaking and disagreeing as they like, and hopefully reaching some kind of conclusion."

The Bain controversy and Harris' legacy became inextricably linked. Bain was sacked as head of Caribbean HIV/AIDS Regional Training (CHART) Network. He subsequently sued the university and has been given a court injunction barring his dismissal.

The university's decision to dismiss Bain led to several days of protests, including a mass rally in Half-Way Tree as supporters charged that Harris was pressured by pro-gay groups.

But Harris insisted that the UWI did not wilt under pressure after he received a letter from 35 organisations that were adamant that Bain could not stay as the head of CHART because of expert testimony he offered in the case of a Belizean man challenging the buggery laws in that country.

Harris also dismissed the suggestion that his decision to leave the vice-chancellor post was a result of pressure he came under over the Bain issue.

"No one has pressured me to leave, and my announcement was at the University Council which happened at the end of April. I have to truthfully say the Bain issue took me by surprise ... . But I hope it does not subtract from my legacy. There are other vice-chancellors who have had difficult periods, but hopefully, what we remember about them are not the moments of controversy, but what it is that they brought to the university."

Harris said the discourse on gay rights is an issue which has to be confronted by all stakeholders, including individuals who are not gay.

"But ... even as I depart I still say we, as a university, should be able to bring individuals in a common space to discuss the issues, and this is one of the most divisive issues to have enveloped our society in many a year. But I believe the vast majority of people in Jamaica want us to be able to talk this through without shouting at each other."

Citing the polarisation of the United States on the civil rights debate, Harris said it is a similar way the gay debate is polarising Jamaica and other countries. He argued that the issue can no longer be swept under the carpet and the country could see some gain from a frank and honest debate.

Harris will retire to St Lucia - the island of his wife's birth - but will spend time between there and the United States where their children are based.