Celebrating a champion - Archdeacon Edmund Davis: 44 years as a priest 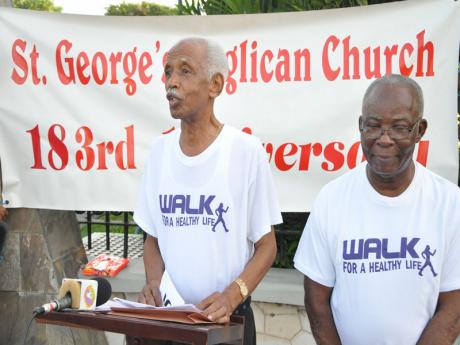 The ministry and work of the Venerable Dr Edmund Davis, who for 28 of his 44 years as a priest served the inner-city communities surrounding St George's Church, where he was rector, will be celebrated by members of the Anglican Church and the wider ecumenical fraternity at a special Thanksgiving Service today at the St George's Church in downtown Kingston starting at 3.30 p.m.

Archdeacon Davis, who retires from active service on July 31, took up duties as rector of St George's Church in November 1986. Under his leadership, St George's Church has implemented a range of mission initiatives in response to the pressing socio-economic needs of residents in downtown Kingston.

These include the distribution of meals for the aged and needy; a legal-aid service; a homework assistance programme; the award of some 40 scholarships annually to secondary and tertiary institutions; and the referral of youngsters for skills training.

He has also served as chaplain to the St George's Girls' School which was founded by the church more than 100 years ago; and he has played an integral role in the administration of the Diocese's Kingston Region which he served as Rural Dean from 2002 to 2008 when he was appointed archdeacon.

At the wider national level, Archdeacon Davis was general secretary to the Jamaica Council of Churches; and chaplain to the Kingston and St Andrew Corporation, as well as the Bellevue Hospital for several years.

His pastoral journey began when he was ordained a deacon in 1969. He entered the priesthood in 1970; and his subsequent assignments include assistant priest at the Church of the Resurrection in Duhaney Park; assistant curate at St Luke's Church, Cross Roads, and Christ Church, Vineyard Town.

He was priest in charge of the Bridgeport Mission from 1975 to 1978, serving at the same time as chaplain of St Jago High School.

Archdeacon Davis is a graduate of St Peter's College, which trained Anglican clergy in Jamaica prior to the establishment of the United Theological College of the West Indies in which the Anglican church is an ecumenical partner.

He holds the Bachelor of Arts Degree in Theology from the University of the West Indies; a Master's Degree from Pittsburgh Theological Seminary in the USA; the Certificate in Church Management from the Selly Oak College in Birmingham, England; and a Doctorate from Utrecht University.

A justice of the peace, he was awarded the Order of Distinction by the Government of Jamaica for his contribution to the Church.