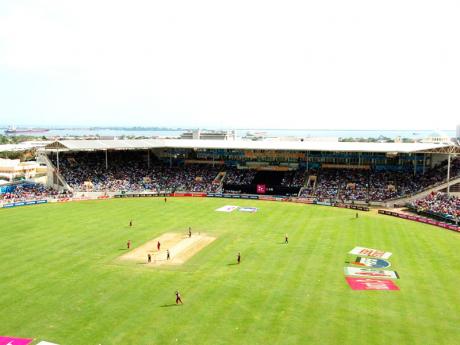 A view of the George Headley Stand at Sabina Park. - File

Cricket is widely recognised as a game of uncertainties, and one of glorious uncertainties at that. Sometimes, however, it comes up with some baffling results, such as Kingston versus Melbourne at Sabina Park last weekend.

The Senior Cup competition, the country's top cricket tournament, entered its fifth round of play last weekend, and after its poor start with some teams finding it difficult to bat through one session of play and being easy pickings for other teams, Melbourne, one of the better teams, were humbled and humiliated.

Both teams had already qualified for the quarter-finals but due to the bonus points system Melbourne led Kingston by seven points, and the only question to be answered was which team would top the Zone.

Everything was set for a good battle between the two best teams in the Zone, between two of the better teams in the competition, and after Kingston made 192 in their first innings, the fight seemed on in earnest.

In 33.3 overs, in 119 minutes, however, the Melbourne first innings was over. Melbourne, with two Jamaica batsmen, one Jamaica bowler with a Senior Cup double century to his name, another experienced Senior Cup batsman, and also a West Indies Under 19 all-rounder in the team, were dismissed for 48 runs.

Other Senior Cup teams, such as the University of the West Indies in the 1970s have fallen for less, and just last week, Hanover were dismissed for 56 and 66 in their match against St. James and lost by an innings and 66 runs.

As poor as the batting on those occasions were, however, the batting of Melbourne, a cricket club, one of the big teams in the country, took the cake.

Melbourne were not at their best, they were without Marlon Samuels, Carlton Baugh, and Nikita Miller, but it was still embarrassing, especially after going to Sabina Park, the country's number one cricket ground, and after winning the toss, they sent the home team to bat.

It was a shocking decision, especially that Melbourne were leading the standings and did not need to win the match. Maybe it was a case of overconfidence, or maybe it was simply a matter of believing they were too good

Such is the level of surprises in cricket, however, that they could well recover to win the title, which they have won more times than any other team in the long history of the competition.

There are other disappointing things in the first part of the season, however.

Too many teams, involving too many players, rob the competition of quality. It is simple as that, and regardless of the excuses, of the lack of leaders big enough to limit the numbers, to make it a competition reserved for the best, to make players proud of being a part of it, to make it the best competition in the island, it will remain as it is - a competition in which whoever are available, in many, many cases, are selected to play.

The bonus points system is bad, for the simple reason that they are too easily acquired, and there are too many teams in the competition, teams like Clarendon who do not even have a home ground and who forfeited their game against G. C. Foster College, and the University of the West Indies who did not turn up on the second day of their fixture against St. Ann.

For the UWI, that is nothing new. That was why they were omitted in the 1970s, especially when university was on holidays and their better players went home.

Teams which do not have the capacity to host matches cannot assist in the development of the game, and neither can teams which fail to finish matches or stay away from matches. For one thing, they both affect the state of the competition in regard to the team's standings because they forfeit points by their absence.