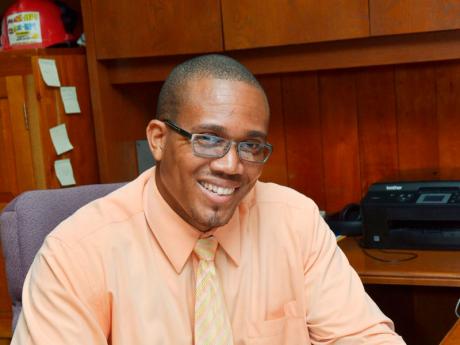 "I am driven by my faith in God, an unshakable belief in the untapped potential of the Jamaican people to achieve whatever we set our minds to, as well as my love for the work we do at the port and the greater contribution it makes to the development of Jamaica." The words of Dwane Forrester - a single father of three - a son, 12, and two daughters, 10 and eight. Forrester happily confessed that his favourite way to unwind is to relax and spend time with his family.

A self-described introvert, he listed his hobbies and interests as preaching and teaching, coaching and mentoring. He's a man who doesn't reveal much, but the did reveal three things to Flair that not many persons who know him know. First, his full name is Dwane Fritz Gerald St Aubyn Forrester. Second, he once had dreams of captaining the West Indies Cricket team. And another one he thinks most don't know is that he is very shy and reserved.

His childhood dreams were to play cricket for the West Indies, as well and become a soldier and eventually the commander in chief of the Jamaica Defence Force. However, when he started working at the Kingston Container Terminal, his ambitions changed to someday leading the team.

That dream has been realised as he was recently appointed the deputy general manager and acting head of the Kingston Container Terminal. At 40 years old, he is the youngest to hold that position. He tells Flair, "It is a blessing and an honour to be entrusted with this opportunity." He describes his professional journey as, "a tremendous learning experience in which I had the good fortune of serving in many roles. I started straight out of high school in 1992 as a gate-pass clerk and quickly moved on to various roles, including vessel planner, IT help desk supervisor, assistant manager yard, senior control tower manager, process implementation manager and operations manager."

He explains that there were disappointments and differences in opinion along the way, but his commitment to the work and development of the port never waned. His current role entails ensuring continuous improvement of the Port of Kingston's operations, processes and policies in support of the port's mission and business objectives. He noted, "I consider it a great privilege to be in this position as it enables me to positively impact my country's growth."

He notes that there are some factors essential to his role as team leader, factors of which he is very cognisant. These include having a clear vision and sense of purpose, the ability to unite people in support of the shared goal of ensuring the Port of Kingston becomes the port of choice, being able to motivate the staff to achieve things once thought impossible or beyond them, and never resting or settling for yesterday's successes. "I am truly inspired daily by the genuine efforts of the average man/worker and their belief in a better way of life, and that we can achieve better and greater things."

In five years, Forrester sees himself in a role that isn't limited to making a contribution and impact at the Port and states that his wish for the local port and shipping industry is for Jamaica to seize the coveted position and become the fourth node in the global shipping industry.