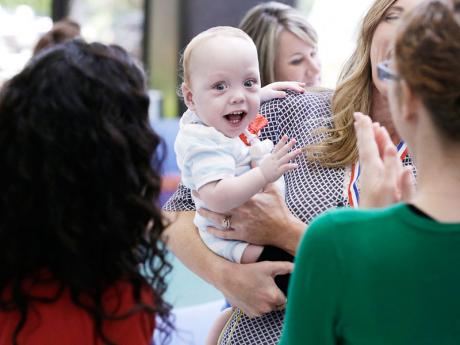 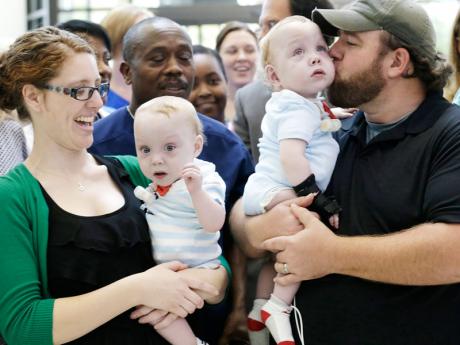 Emmett Ezell (second right) is kissed by his father, Dave, as his brother, Owen, is held by his mother, Jenni, as they prepare for a group photo with caregivers at Medical City Children's Hospital in Dallas last Thursday, July 24. The formerly conjoined twin boys returned to the hospital where they were surgically separated to celebrate their first birthday with those who helped care for them. - AP
1
2

Formerly conjoined twin boys celebrated their first birthday last Thursday with those who helped care for them at the Dallas hospital where they were separated.

Emmett and Owen Ezell, who turned one last week, returned to Medical City Children's Hospital where they were separated last August. The twins, who shared a liver and intestines when born, left the hospital for inpatient rehabilitation in April and finally were able to go home in June.

"We dreamed of this day and this moment and them reaching this milestone, but it wasn't a reality," said their mother, Jenni Ezell. "And we've made it through and we're looking forward to many, many more birthdays."

The boys breathe on their own but still rely on feeding tubes. Their mother says they both were sitting up even before they left the hospital and she expects them to be crawling soon.

"Owen is about to start crawling, he's so, so close. And I figure once he starts going, that one is going to be really close behind him," she said, pointing at Emmett. "They're doing really well. They're hitting the milestones that they need to be and we're looking forward to the ones that are coming up."

The boys, who weighed a combined 11 pounds, 15 ounces at birth, now each weigh about 20 pounds.

Their father, Dave Ezell, said they are grateful to those who cared for their sons at the hospital.

"Every one of these people have gone out of their way to take care of these little boys. There aren't words to express the gratitude that we feel for these people," he said.