Hats off to Westwood! - Trelawny school rises from humble beginnings to take place among Jamaica's best 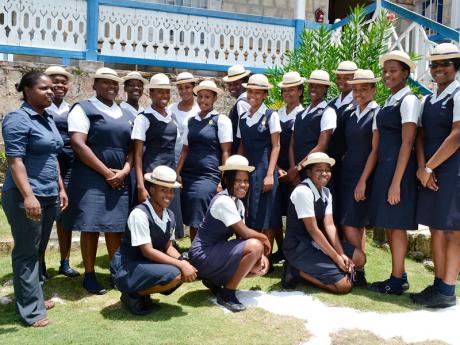 Members of Westwood High's culture club who won a recent competition by showcasing their school's history through dance, poetry and drumming. 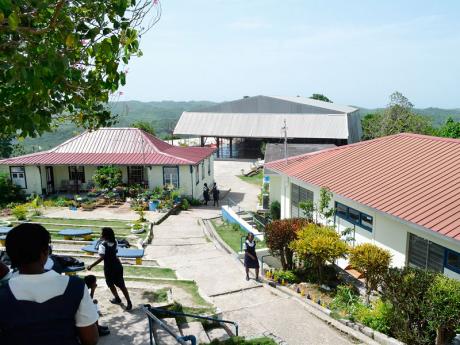 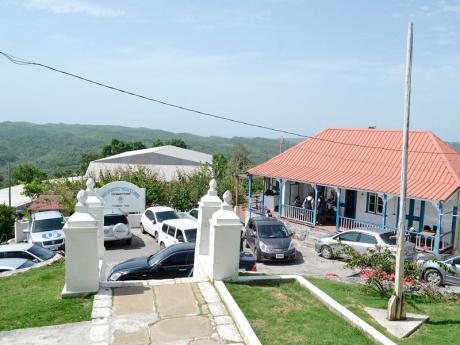 The view from the administrative building at Westwood High. - Photos by Errol Crosby 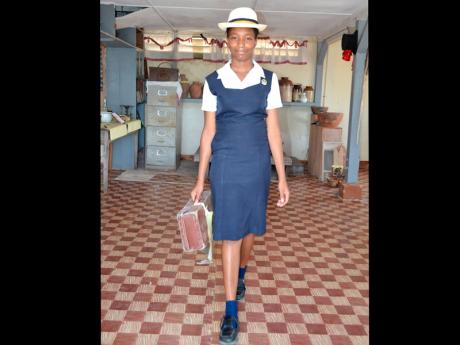 A student models how Westwood girls used to attend school with their jippi-jappa hats and grip. 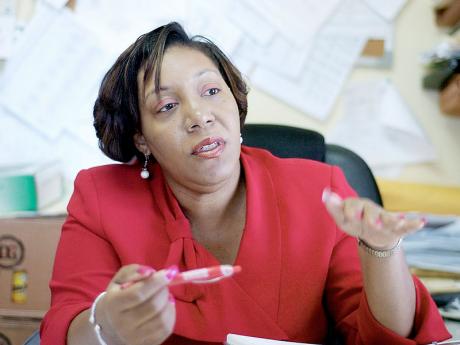 Karen P. Francis, principal of Westwood High, hopes the school will soon be able to get reliable Internet service.
1
2
3
4
5

Sitting upon a hilltop in Stewart Town, Trelawny, as if it were a tribute to the sun, Westwood High School has been shaping the lives of young women in post-Emancipation Jamaica for 132 years.

Founded by Baptist minister William M. Webb in January 1882 with just six students, the school has had quite a colourful history. In fact, it was founded out of the colour prejudices at that time, when there was strong objection to dark girls being educated at the same school as those of fairer skin. So intense was racial antipathy that a school operated by Mrs Knibb in Falmouth was broken up a few years earlier, after the daughters of two local black ministers were admitted. When she refused to dismiss the black girls, the other girls were withdrawn, breaking up a well-established school.

"This history has followed us," Karen P. Francis, Westwood's principal, told The Gleaner, pointing out that the school still prides itself in providing a quality education to all girls, regardless of class, colour or creed, the majority of whom are poor black girls.

On a recent visit, The Gleaner toured Westwood's immaculate campus, which is caressed by an ever-so-frequent gentle breeze. The magnificent view from the hills and the old charm of the school buildings paint a picture of paradise, as the girls sit quietly in their classes and a few others walk about wearing that standout part of their uniform which is distinctly Westwood - the jippi-jappa hat.

While Francis admits the school's biggest challenge is maintaining its rules and traditions, she said the hats are loved by most students.

"When they go out and everybody is gloating over the school with the hat, it makes them feel special because we are the only school which wears a hat and they like that," she said.

An old girl, Francis reminisced on one of the boarding school's traditions which had to be discontinued - the days when the girls would walk down the hill in pairs on their way to church in the village.

"It was a beauty to see and I am still for that," Francis said, before explaining why the school decided to end it about six years ago.

"There was a decision taken during the time when they were kidnapping children in the country and there was a safety concern," she said. "The principal [at the time] took a vote and the staff took a decision [to discontinue it]. I believe the villagers would have loved to still see the girls coming down in twos."

Starting out in 1882 at Manchester Pen as the Manchester Girls' School, the institution was soon renamed Trelawny Girls' School one year later, as the first name gave the impression it was in the parish of Manchester. As it expanded and started admitting students from other parishes, the name was changed to Westwood High School for Girls, and in 1891, it was established at its present site.

Asked if it might be time for a new campus, Francis said the National Education Inspectorate had recommended that Westwood consider building a new school. "But who is going to provide the money for that?" she asked.

"I warmed to the idea because the infrastructure would be new, but then, when I thought about it, how would we fit in the school song, 'Oh, Westwood, sitting there upon a hilltop'?" added Francis, who has just wrapped up her fifth year as head of the school. On top of that, she isn't so willing to part with the lovely view from the hills. "We have lands we could use, but then we would not be able to see the sea as we can see here. We are far inland but we can see the sea."

That aside, Francis admits that if the money comes, she would accept it.

The school buildings along with several artefacts on display in the school's heritage centre could provide a great attraction for visitors and history enthusiasts. In fact, the principal said she had anticipated that the school would have been included as part of the Trelawny experience for visitors when cruise ships returned to Falmouth three years ago.

The mini-museum is maintained by the culture club, which is responsible for staging Culture Day and different heritage programmes during the year. They recently won a competition put on by the Jamaica National Heritage Trust by showcasing their school's rich history.

Despite the school being set on a hill by itself, Westwood, which has risen to being one of Jamaica's top schools in academics, remembers it is part of the Stewart Town community. A number of residents are contracted by the school and by some parents to help the boarders, especially. In addition, the environmental club has partnered with the community to collect plastic bottles for recycling.

The environmental and culture clubs are just two of several ways in which Westwood seeks to focus on developing the whole student. That's why in addition to academics and the wide range of clubs and societies, it also places a special emphasis on teaching students social graces and etiquette. So at lunchtime, the students gather in the dining hall to have their meals with a knife and fork.

"We teach them how to fit in," Francis said of those who may not be accustomed to eating like this. "Some aren't used to it because families at home don't sit together and have a meal anymore."

This, she said, is causing many Jamaicans to lose vital communication skills as many families no longer have dinner-table talk, with different members eating in their rooms or in front of a television and at different times.

So despite some resistance from students, this is one tradition the principal says will remain as the school continues to produce rounded young ladies, ready to fit into the world.

It is this drive to produce well-rounded graduates which makes 17-year-old Shafaye Wray consider it "an awesome privilege" to be Westwood's head girl.

"The school motivates us to be the best we can and it focuses on developing all our qualities here - not only academic but social, spiritual and physical well-being as well," said Wray, who dreams of becoming a teacher, probably one day standing at the head of a class at her own alma mater.

Westwood will continue down this road, Francis said, although some students would like to break from some of the traditions.

"They would say they want to be like all the others, but we believe that we must be a cut above the rest, which we must maintain against all odds because we believe in excellence," the proud old girl told The Gleaner.

Look out for more stories from Trelawny and Maidstone, Manchester, this week as The Gleaner continues to track the development of free villages in Jamaica.