Everything will soon be non-existent - farmers 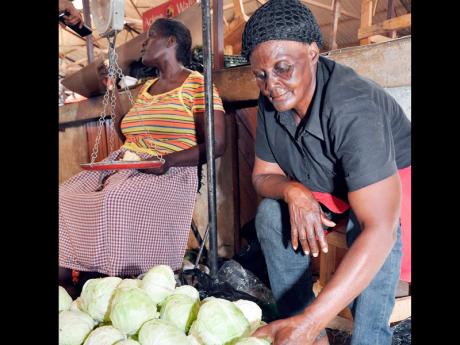 Nina Bell-Bradford, farmer from Manchester, shows some of the produce she still had available at Coronation Market in Kingston last week. She is worried about the drought crisis. - Jermaine Barnaby/Photographer

For a parish holding the highest agriculture production rate of 19.2 per cent and said to be the second breadbasket of the nation, farmers in Manchester have declared that farm produce will soon become non-existent if there is no rain by August.

"Everything is short now, from citrus to catch crops like tomatoes, carrots, lettuce - everything is short. There is no corn, whether green or dried, yam is going, potatoes the same, limited amounts of banana and very few amounts of plantain," stated regional director of the Jamaica Agricultural Society, Neville Burrell.

"If we get some rain by next month then farmers will be able to put in catch crops that will yield in three or four months and will have it ready for December, but if not, nothing will be available, at least not locally."

Other crops in shortage include cabbage, sweet peppers, broccoli, cauliflower and string beans.

According to farmer Collin Cole, items such as yam and sweet potato will not be available in December.

"If they are short now, ground food such as yam, sweet potatoes and all a dem foods deh which take approximately six months to nine months to be ready will not be available for December, because farmers who have yams in the ground now won't be able to reap them, as they are already burning up," said Cole.

hoping for the best

He expressed that with the soil so dry now, farmers who generally used the June to July rainy period to plant are on a standstill, hoping for the best.

"You see May to June is a bad period for farmers. Somehow the crops planted in that time get messed up, but the June to July period is a great period. We normally look forward to planting the catch crops, but see so far, no rain. August is a good period also, that's why we hoping some rain will come between now and August," the farmer stated.

With the obvious reduction of farm produce in markets across the island, some farmers have reluctantly agreed that Jamaica may need to import ground produce, but they have stated that they have no intention of buying or consuming any of it.