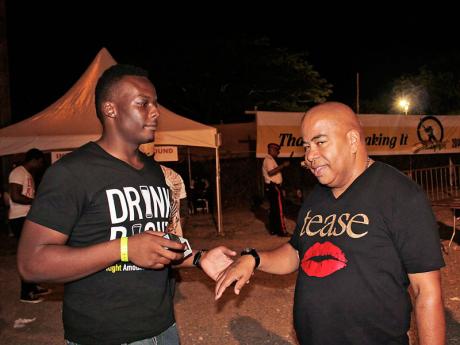 Travis Whyte (left), Red Stripe Drink Right ambassador, stamps the hand of Rajea Forrest upon entry to Reggae Sumfest on July 19 at Catherine Hall Montego Bay. Red Stripe's Drink Right team at the event checked IDs and ensured that persons 18 and over were stamped to access alcohol at the bar. - Contributed

July 13-19 marked the 22nd annual staging of the greatest reggae show on earth and once again, Jamaica's coolest beer giant was on board to make the experience phenomenal for Reggae Sumfest patrons.

This year, the company took a revolutionary approach to their participation, pushing the message of 'Drink Right' to patrons at Reggae Sumfest. 'Drink Right' ambassadors moved through the crowd, working the bars to check IDs and stamp persons 18 and over, giving them access to alcohol at the bar. The system worked with ease and patrons actually welcomed the new move.

Lloyd Pomelly, a loyal Sumfest patron, said he was delighted to see the team working especially at the bars.

"There are many persons here who are under 18 and this prevents them from indulging in alcohol, which is what we all want as responsible adults. My children are here and I don't have to worry about them getting anything from the bar but water and Pepsi," he remarked.

Red Stripe launched the 'Drink Right' campaign in 2008 with the aim of addressing the issues of underage drinking, how to prevent excessive drinking and drinking and driving. 'Drink Right' is a social movement that strives to create a culture and attitude of responsibility in the consumption of alcohol through the implementation of a variety of programmes that show the highest potential for impact.

According to Cedric Blair, managing director of Red Stripe, the company took corporate social responsibility to the next level by ensuring that a 'bullet-proof' ID system was implemented, allowing only eligible patrons to access the alcohol bar.

"We understand the problems that harmful drinking can cause and we are contributing to efforts to find effective and sustainable ways to address them. The ID system at Reggae Sumfest worked perfectly, it was well received and we will continue to push 'Drink Right' at events with which we are associated," said Blair.