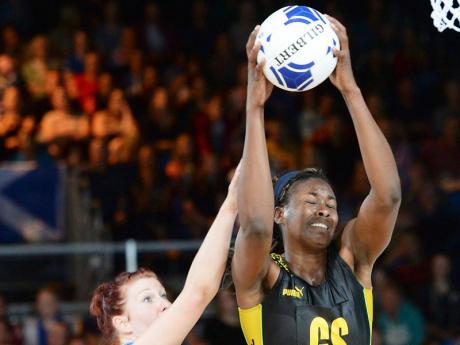 "It's the most important game so far; the others were also important, but the next two will decide whether we move on to the semi-final or not, so we have to come strong and play well throughout."

The Jamaicans, ranked one place above the Africans, have hardly set a foot wrong so far in their three games, battering St Lucia 88-24 and getting by Northern Ireland 65-34, before yesterday's 68-26 win over host nation Scotland, with Minister with Responsibility for Sports Natalie Neita-Headley in attendance at the Scottish Exhibition and Conference Centre.

Romelda Aiken and roommate Thristina Harwood led the lines with 57 goals between them - Aiken, the usual target, with 42 goals from 49 attempts, while Harwood chipped in with 15 from 21 and 12 assists. Jhaniele Fowler-Reid came in during the fourth quarter and helped herself to 11 from 14, with Sasher-Gaye Henry being the top facilitator with 18 assists.

Paula Thompson was a machine in mid-court, hassling the Scottish girls with five interceptions and four deflections, as the team tightened their defensive vice-grip as the game progressed.

Coach Minneth Reynolds was pleased with the result.

"We are happy with the result, we wanted a win, and that's what was important. It was a little bit shaky, and we still have a few things to do defensively. We didn't start too well defensively, and as a result of that we had a little struggle at the start," Reynolds told The Gleaner.

Malawi, known as 'The Queens', will know that they must win to keep their hopes alive, but will turn up full of confidence after pushing two-time defending champions and world number-two New Zealand, which beat them 50-47 earlier in the competition.

In their other games, the Africans have beaten Northern Ireland 71-50 and St Lucia 69-28.

"We are not surprised about Malawi's strength in attack and defence," Reynolds pointed out. "They have been working on their game, and it has been very good so far, and so we know that we cannot take anything for granted. We have our game plan and they will have theirs, so we will hope that our girls execute well on the day," Reynolds added.