Step It Up burns Smokin Man at wire 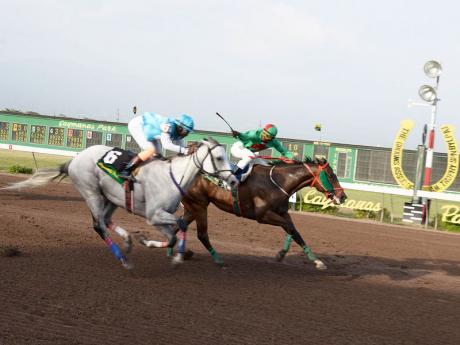 Jockey Robert Halledeen aboard STEP IT UP raises his whip in the direction of apprentice Omar Simpson, aboard the favourite SMOKIN MAN, as he celebrates winning the Grooms Association of Jamaica Trophy, a $350,000-$300,000 claiming event over 1000 metres straight at Caymanas Park on Saturday. STEP IT UP won by a neck. - Gladstone Taylor/Photographer

Super fit STEP IT UP won his second consecutive trophy race in recent weeks, this time lifting the Grooms' Association of Jamaica Trophy (claiming $350,000-$300,000) over the straight five course in a driving finish from 3-5 favourite SMOKING MAN at Caymanas Park on Saturday.

Ridden as usual by Robert Halledeen for owner Orville Johnson and trainer Stedman Curtis, STEP IT UP, fresh from his post-to-post win in the Sports Journalists of Jamaica Trophy over 1200 metres on June 29, disputed the lead with the grey SMOKIN MAN coming on to the main track. And with SMOKIN MAN proving a handful for 4.0kg claiming apprentice Omar Simpson when drifting out to the stands' side, Halledeen used his experience to best advantage, holding off SMOKIN MAN by a neck in a field of seven.

Halledeen said STEP IT UP was in peak condition and he knew that the down-in-class SMOKIN MAN could ill afford to skip a beat.

"I broke sharply from the number three post position and with SMOKIN MAN on my shoulder from early, I decided to ride him close coming out of the chute and in the end, my superior riding skills made the difference," he said.

A five-year-old bay gelding by Dayton Flyer out of Constant Girl, STEP IT UP ticked off his fourth win from 13 starts this season and his sixth from 42 starts lifetime, with $2.5 million in stakes.

On a day when L.P. Azar Limited, as title sponsors of the meet, publicly recognised the grooms' fraternity, the remaining races on the card were named after veteran grooms with more than 30 years' service and who are still active today.

They include Hall of Famers Gerald 'Guardie' Harrison, still active after 37 years, and Cecil Chambers, who first started in the profession in 1960, a year after Caymanas Park was opened. All received standing fans and bicycles courtesy of L.P. Azar, while the programme also facilitated the seventh in the McKay Security-sponsored Caymanas Live monthly series of concerts in front of the stands, featuring Kalado.

Meanwhile, champion jockey Dane Nelson rode two winners on the card in FRANFIELD (5-2) and 8-5 favourite RAJA HINDUSTANI to point ahead of arch-rival Cardenas after both started the day locked on 53 wins. Cardenas rode one winner, event favourite ELUSIVE DREAM in the first race to lead briefly, but Nelson was back on level terms in the very next race.

Also riding two winners was Paul 'Country' Francis - NOBODY BUT ME at 20-1 for trainer Eddie Hamilton and 2-1 chance EXCEPTIONAL SLEW for Gresford Smith in the sixth; while trainer Morris Powell posted two winners in CAUSE FOR CONCERN, a 9-5 favourite in the third and FLAG ON THE LAY at 5-2 in the seventh.