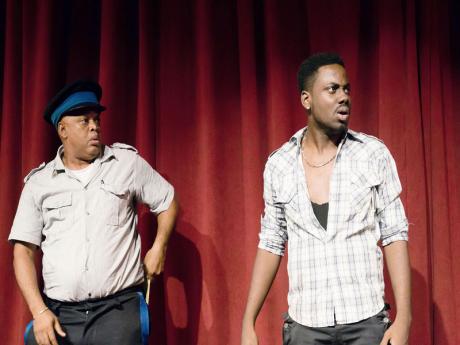 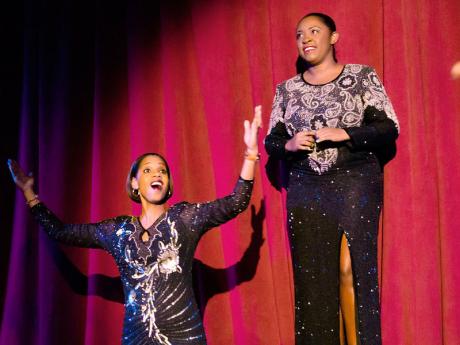 Simone Clarke-Cooper (left) steals the spotlight from Patria-Kaye Aarons (as Madame Consuela) during Oliver Mair's upcoming comedy revue 'Laff It Off', which opens on Friday, August 1, at the Philip Sherlock Centre for the Creative Arts, University of the West Indies, Mona.
1
2

Ahead of this Friday's opening of Laff It Off, late last week, snippets of the musical revue were presented to a small audience at the Philip Sherlock Centre for the Creative Arts, University of the West Indies (Mona). It also served as an opportunity to introduce the cast, some members of which are new to the stage or have spent a long time away from it.

Among the former is 'Dutty' Berry, who shot to prominence last year through his videos tracking Tessanne Chin's progress on 'The Voice'. Included in the faces not often seen are Simone Clarke-Cooper, one of the well-known broadcasters from radio and morning-time television, as well as Mark 'Bones' Martin, who was on Lime Tree Lane.

Also in the cast are Christina Starz, Rodney Campbell, Patria-Kaye Aarons, and Akeem Mignott. Craig McNally is the director; Dalton Spence and Hugh Douse organise the music; with Michael Holgate in charge of movement; and Nadia Roxburg doing the lighting.

As McNally said, "We wanted to tap into talented people who had not been on stage in a while, or who have shied away from the stage." One unusual stage face that is connected with Laff It Off, but will not be on stage, is Damion Crawford, minister of state in the Ministry of Tourism and Entertainment, who is the production's patron.

Producer-writer Oliver Mair introduced Laff It Off, which will run over two weekends at the centre, and made a rapid-response promise. "I guarantee you, if there is an issue that comes up on the Friday of the show, it will be in it," Mair said. As for what has already been prepared, Mair said, "We will be covering anything that is topical in Jamaica," mentioning the Jamaica Public Service Company (JPS) and a hint of scandals.

One of the extracts presented was on the topical side, with Buju Banton, Vybz Kartel, and Busy Signal in the same jail cell when Busy is released. A gruff-voiced Buju (Campbell) and pale-faced Kartel (Mignott) are disconcerted, but the conclusion, done to the tune of The Beatles' Let it Be, is that there is "only one way to get out: Get KD".

JPS figured in the first skit, Berry setting up a sing-off between two sections of the audience, with one singing "JPS, JPS, the light bill too high" and the other "JPS, JPS, Jamaica a cry". That morphed into a large segment of the cast in formal dress and posture delivering humorous singing with straight faces - even when there was a tussle between Clarke-Cooper and Aarons for the spotlight, which Clarke-Cooper won in high-pitched glory.

The funniest skit at the Laff It Off preview was the encounter between the lawman Spellman (played by Martin) and Mignott as a driver who was caught speeding and had to spell a word to get himself out of trouble. Mignott stuttered, he struggled, he asked for context, he huffed, he strained, he spelt it woefully incorrectly - and Spellman beamed as he said Mignott was lucky to have got it right.