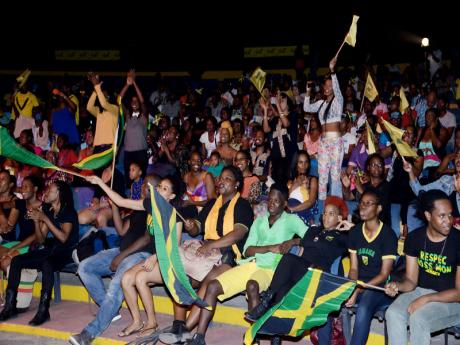 A section of the audience at the Ranny Williams Entertainment Centre, Hope Road, St Andrew, on Saturday night. - Photos by Winston Sill/Freelance Photographer 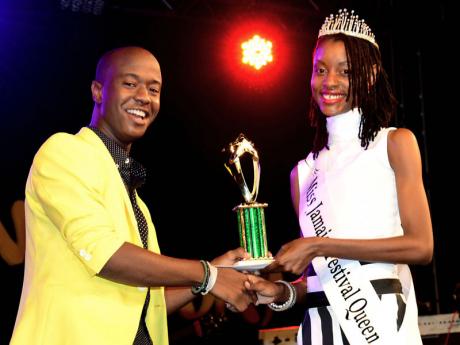 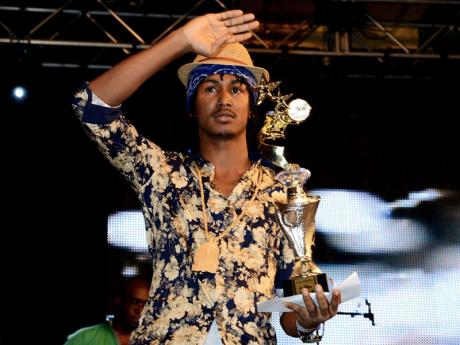 Deep Jahi salutes the audience at the Ranny Williams Entertainment Centre, Hope Road, St Andrew, on Saturday night after collecting the trophy for his winning 2014 Festival Song 'I Love Ja'.
1
2
3

On Saturday night, the judges' choice of Deep Jahi 's I Love Ja as the 2014 Festival Song did not sit well with many members of the audience.

So when the winner was announced, apart from Deep Jahi's supporters, only a few persons stayed at the Ranny Williams Entertainment Centre, Hope Road, St Andrew, to see him accept his prizes, as well as perform the top song again. The unceremonious mass exit may have spoilt the intended after-party.

Sanjay Thompson was awarded the only two sectional prizes, Best Performer and the Voters Choice award, before the top three were announced. Sanji placed second overall with Jamaica Boom, while Kahani copped third place with My Jamaica.

The Gleaner spoke with Deep Jahi and Thompson after the show, the latter admitting surprise at not being chosen the winner, especially having won both sectional prizes. Deep Jahi, in spite of feeling overwhelmed by his victory, realised that in a competition, there are diehard fans, hence people react according to their emotional attachment.

"The mixed reviews are things that help you go through life and help you to get stronger. If you have everybody saying you are the best, then you cannot even acknowledge that you are the best because you not feeling any challenge. So sometimes challenge is good," the 2012 Magnum King of Dancehall said.

Despite having won two titles, Deep Jahi promised that the best is still to come in his music career.

Completing the list of 10 finalists were Oliver Smooth, Petrol, Bono G, King Salomon, Bastic, Clearance, and Rojjah. Five of the songs had Jamaica in their title.

This year's staging of the Jamaica Cultural Development Commission's (JCDC) flagship competition saw strong, creative performances from the finalists. Witnessed by a smaller audience than normally enjoyed by the Festival Song finals, the concert began with creativity and excitement, which reinforced the contest's theme, 'It's a New Day'. The competitors entered on roaring motorcycles, alighting in front of the audience. Together, they then gave a commendable rendition of a gospel number.

Individually, they made a convincing case for patriotism with their entries, backed by the DMG Band.

The organisers deviated from the previous years' format in which each contestant performed twice with the previous year's winner as guest. Therefore, the two-segment show featured lively and engaging presentations from guest vocalists Ikaya, Nesbeth, and Bugle.

Ikaya had the audience listening to some of her original songs, including the new single Bang, Bang. Bugle, the final guest performer, had members of the audience laughing when he announced that the 'baddest' ghetto food was tinned mackerel, white rice, and pepper. The audience understood Bugle's rationale for not singing love songs.

Nesbeth was the best of the three. Attired in full white, he revealed that he is now able to dress well because of the success of one of his songs. Previously, Nesbeth said he was only able to wear cream-coloured clothes.

Wit was Nesbeth's hallmark, and between comical tales, he delivered songs such as Board House and Taste Victory. Nesbeth also shared his success formula of the 4 D's: discipline, dedication, determination, and desire.