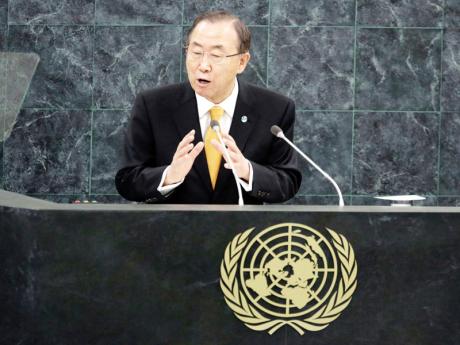 Secretary-General Ban Ki-moon reinforced the Security Council's call for an immediate and unconditional humanitarian ceasefire in the Gaza war yesterday and demanded that Israel and Hamas end the violence "in the name of humanity".

The United Nations (UN) chief accused Israeli Prime Minister Benjamin Netanyahu and Hamas leader Khaled Mashaal of being irresponsible and "morally wrong" for letting their people get killed in the conflict. He urged them to demonstrate "political will" and "compassionate leadership" to end the suffering of war-weary citizens.

"Gaza is in critical condition" after pummeling by Israeli forces that has killed helpless civilians and raised "serious questions about proportionality", he told reporters.

The war, now in its 21st day, has killed more than 1,030 Palestinians, mainly civilians, according to the Palestinian health ministry. Israel has lost 43 soldiers, as well as two Israeli civilians and a Thai worker killed by rocket and mortar attacks from Gaza, according to the Israeli military.

Ban said there must be accountability and justice for actions committed by all sides. He stressed that as an occupying power, Israel has "an international legal obligation to protect civilians" and called on its government to do "vastly more" to ensure the safety of UN sites where more than 173,000 Gazans have sought refuge.

The secretary-general said he had a long talk with Netanyahu yesterday morning and urged the Israeli leader to accept a ceasefire and then address the root causes of the conflict. He said he has been in indirect contact with Mashaal through Qatar and Turkey, which have good relations with Hamas, the Palestinian faction that controls Gaza.

The Security Council issued its strongest statement yet on the Gaza war at an emergency meeting just after midnight, but it was not a resolution and, therefore, not legally binding, a point criticised early yesterday by the Palestinians, who said they would keep pressing the UN's most powerful body to adopt a strong resolution.