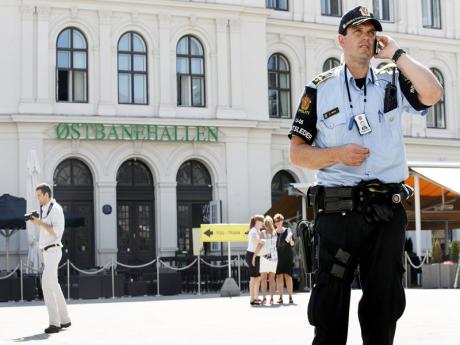 Armed police stand guard at the central railway station in Oslo, Norway, because of a possible announced terror attack by Islamic fundamentalists returning from Syria.

More than 2,000 Syrians, almost half of them pro-government forces, have been killed in just over two weeks of fighting in Syria, making it one of the worst death tolls in the country's civil war, opposition activists said Monday.

President Bashar Assad's forces have gained momentum in the fighting, with rebels seeking to topple him from power. Infighting also has hurt the rebel cause, with Islamic extremists battling moderate fighters.

The recent attacks came after Assad was re-elected last month to a third seven-year term in a vote that was confined to government-controlled areas and dismissed by the opposition and its Western allies as a sham. In his inauguration speech on July 16, he confidently declared victory and praised his supporters for "defeating the dirty war" against Syria.

Assad prayed at a Damascus mosque at the start of a major Muslim holiday on Monday, smiling as he was shown on state TV greeting Muslim clergymen at the Khair mosque in his second public appearance in less than two weeks.

More than 300 soldiers, guards, and workers at the Shaer field were reported killed by Islamic State militants in a three-day blitz offensive to capture the field. The army recaptured Shaer on the weekend.