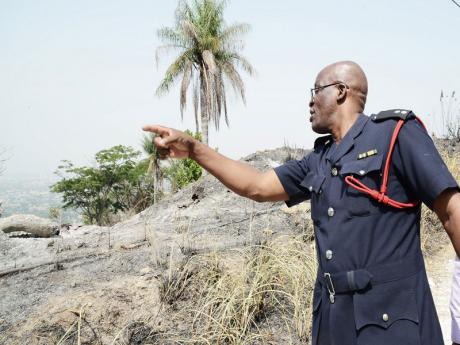 Assistant Commissioner John Morias points to the devastation yesterday when he spoke to the media. 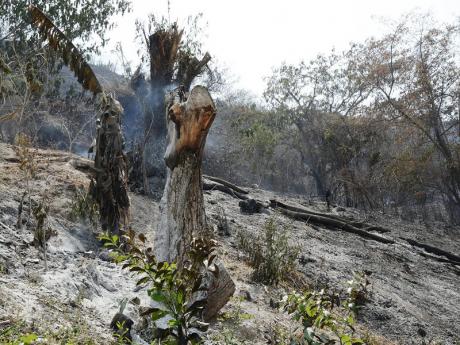 What's left of this section of the hillside in Jacks Hill, St Andrew, after the fire on Sunday. 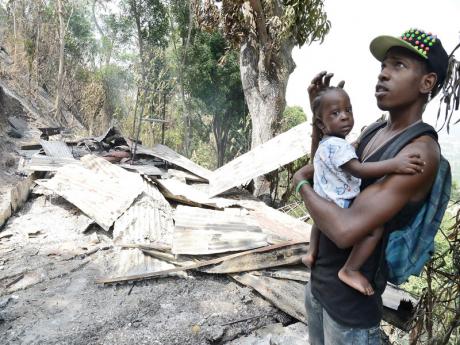 A prolonged drought is proving to affect Jamaica in more negative ways than one, as the country's vulnerability to bush fires rises with each passing day.

Residents of Jacks Hill in St Andrew were the latest victims as a massive fire ravaged the hillside, taking a house and crops in its wake.

Superintendent Lansford Williams of the Kingston and St Andrew Fire Department said it was notified of the fire on Sunday at approximately 10:40 a.m.

"We dispatched units and got into operation to fight the fire immediately. However, the operation was affected by the high wind, and as you know, there is no water in the area, so the units had to be making trips back and forth for water which heavily affected us," he told The Gleaner yesterday.

"Whenever we have fires in areas like these, it would burn, go down into the gully, and then come up at various points, leading to the spread. At the various points where it was accessible to us, we got into operation and paid close attention to the houses that were in close proximity to the fire," Williams added.

Yesterday, he was not yet able to give an estimate of the damage.

When The Gleaner arrived at the informal settlement on the hillside along Harriman Close where the house had been engulfed in flames, the two residents were not present.

Michael Matthews, their neighbour, gave his account of what he described as a life-threatening ordeal filled with hours of hard work. Luckily, his house had escaped the fire.

"We could only see the fire start to burn all around the house dem bout inna di 12 o'clock bells. Me and the owner a scatter from left to right as we tried to out it before it reach the house. Nex ting we look an see the fire right at the back door to where the kitchen was," he said.

"By time wi guh roun deh wid some water, it reach inna di house already, through di kitchen and gone to the bigger house. Five of us tried our best to out the fire, but every time we went for water and back, it only got bigger; it neva even possible for the fireman dem fi reach up pon hill fi help wi. It take bout three hours before everything jus bun down," Matthews continued.

On the other side of the hill, Keith Bailey, who has been a resident of Mulberry Avenue for more than 30 years, was also engaged in a losing battle with the fire to save his crops. He was able to save his house and apiary in the process.

He noted that he was at a church in the area around 12 p.m. when he saw the fire on the hillside. Bailey initially thought it would die down, but he realised the situation was only getting worse, as it was about 60 feet away from his home. He left church immediately.

"We been calling the fire station from a long time but nevertheless they were on the other side of the hill and the fire was stretching right across. That is when I started to move my goats from around the back and into the yard," Bailey said.

"In the evening when I found that I couldn't manage it anymore, somebody went across to call the brigade and they came across ... .

"I lost my pineapple walk with about 3,000 root of pines, yams and a couple hundred banana trees, but I am still happy to know that we were able to contain the fire and stop it from reaching my building," Bailey added.

Approximately 40 firefighters and three units were in Jacks Hill to extinguish the blaze.