Bolt debit card in the works 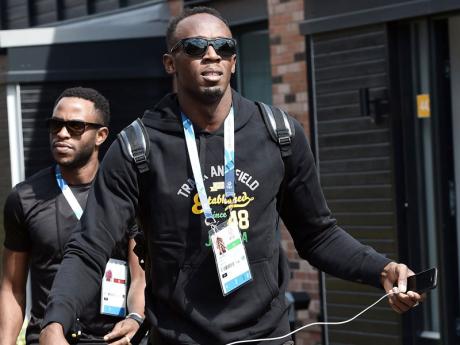 Jamaica's ace sprinter Usain Bolt walks ahead of his executive manager, Nugent Walker, at the Athletes Village in Glasgow, Scotland, as he makes his way to training. - Ricardo Makyn/Staff Photographer

Usain Bolt could soon have his very own prepaid debit card. Representatives of the fastest man in history and American investor Horace Madison are in the early stages of negotiations for Bolt to have his very own card, much like American entertainment mogul Russell Simmons and hip hop artiste L'il Wayne.

The investor/entrepreneur, who manages L'il Wayne's business, was here on the island recently trying to create synergies between Jamaica's financial and creative sectors, hoping to initiate projects that would see the country benefit financially from its creative talents. He has also begun to invest some of his own money into local ventures. The Bolt card could be another, if all goes well.

Should the deal go through, Bolt would not just earn a lot more money, he would also become an industry.

Prepaid debit cards work similar to credit cards. A consumer signs up, adds money to the account, and then uses it just like they would a credit card. The difference is the associated fees are much lower. Bolt would earn a percentage of those fees, adding to his already considerable wealth. Forbes estimates that Bolt already earns in excess of US$20 million a year.

"I had a very positive meeting with Norman Peart (Bolt's business manager) and discussions are under way," said Madison, explaining that there was not much more he could add as discussions have only just begun.

Madison explained that a Bolt card makes perfect sense for the athlete. Generally speaking, more than a billion United States dollars is sent back to Jamaica from citizens living overseas. Each time money is sent back money transfer entities charge relatively hefty fees for the service. "But why pay the US$20 or US$30 when you can use the transfer service that comes with the card for US$3," he argued.

As Madison explained it, Bolt would attract a portion of the fees for attaching his brand to the card. "His brand will be used to market and promote the card," he said. "We are relying on the double entendre that is his name, and what does it stand for: a lightning bolt. You can send money quickly, transactions can happen quickly. I need to send something Usain fast. This is a revenue stream that will be going on in perpetuity because people will never stop wanting to send money and send it quickly."

On a wider scale, should the venture become reality, it would also create jobs in Jamaica's job-starved economy. "It would help bring jobs to Jamaica because one of the components of the card is that there needs to be a call centre," Madison explained.