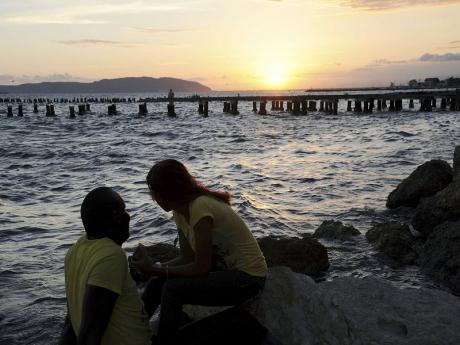 A couple enjoying the sunset on the waterfront. File photos

The waterfront, downtown Kingston, is again being pointed to as a diamond which could lead the rebirth of the city.

This time, it is architect and urban planner Clifton Yap who has added his voice to those who say maximising the waterfront and improving safety and security in downtown Kingston are key to redevelopment.

According to Yap, developers have ignored important steps when planning how to improve downtown Kingston, then afterwards try to fix problems that should have been dealt with at the beginning of developments.

He charged that the waterfront should be properly maximised as, in all great cities over the world, the waterfront is always the focal point for people to carry out business, socialise, stroll, ride bicycles, dine and enjoy entertainment.

"In places like Barcelona, Copenhagen, Stockholm, and many other places around the world, the waterfronts have played a key role in their development," noted Yap.

"Kingston's waterfront has been very neglected and underdeveloped, and is a reflection of the overall state of degradation in which downtown Kingston has remained for decades," he added.

The urban planner further stated that some American cities, including Baltimore, Maryland and Portland, Oregon, were faced with conditions similar to what now exists in downtown Kingston, but these were improved after the authorities upgraded their once blighted waterfronts.

Yap charged that waterfront areas must be treated as prime propriety and steps made to improve water quality, so that the harbour can once again be used for recreational activities.

He proposed that parking lots should be moved from the waterfront as they are taking up space that should be used to further improve the area.

"There was a time when people used to swim in the Kingston harbour, they used to have a cross-the-harbour competition and they had water ski out there, and that was the fun days at the waterfront," said Yap.

"Stop allowing structures to be built in front of the waterfront which have blank or close-off facades towards it, at the street level. "Promote the development of shops, food and entertainment facilities on the waterfront."

On the issue of security, Yap argued that measures must be put in place to ensure people feel safe when they venture downtown Kingston for business or pleasure.

According to Yap, the disorder of the physical environment has contributed significantly to criminality and anti-social behaviour Downtown.

"This chaos and disorder is manifested in the abandoned and rundown buildings, the capturing of sidewalk spaces and streets by vendors with their goods sprawled all over the pavement, and the general squalor and unsightliness all around."

"Jamaica needs to allocate its resources to benefit the majority of its people, so that they can build civic pride and have a feeling of ownership in their city. Unless these matters are addressed, and people learn to abide by the rules, then there will be no forward movement in the development of downtown Kingston."