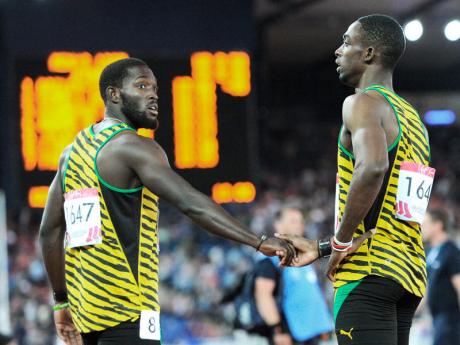 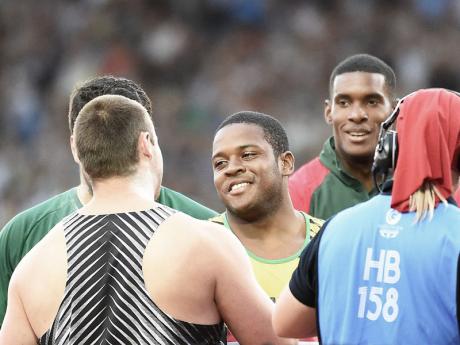 Jamaica's Odayne Richards (centre) is congratulated by New Zealand's Tom Walsh (left, back to camera) and fellow competitors after winning the gold medal in the men's shot put at the Commonwealth Games in Glasgow, Scotland, yesterday.
1
2

Brilliant sunshine swept over Glasgow for much of the day, with temperatures reaching as high as 23 degrees Celsius - quite unusual at this time of the year. The Jamaicans were just as hot on the track and in the field, where Richards won the country's first Commonwealth Games gold medal in the shot put, while setting a new national and Games record.

Richards hurled the shot put 21.61 metres - the best-ever mark registered at the Commonwealth Games, and the best ever by a Jamaican.

Richards wasn't the only Jamaican draped in the island's flag, however, as Kemar Bailey-Cole didn't seem too bothered by another poor start, steamrolling his way to 10.00-flat in the men's 100 metres final.

The towering sprinter seemingly pulled back the entire field, including silver-medal winner, England's Adam Gemili, 10.10, and fellow Jamaican, Nickel Ashmeade, who finished fast in 10.12 for the bronze.

"I couldn't believe, but I came out here to win, and I did just that. I had to power through when I saw everyone leaving, hold my composure and not panic. It feels pretty good because we are number one in sprints, and I wanted to keep the trend going," said Bailey-Cole.

It has been a tough last few months for Veronica Campbell-Brown, who had won two silver medals - in the 100 metres and 200 metres - at previous editions and was seeking her first Commonwealth gold medal.

However, Nigeria's Blessing Okagbare ensured that her return to the Commonwealth Games women's 100m final would also be full of challenges, winning in a blistering 10.85 seconds - a new Games record.

Campbell-Brown's silver lining came in the form of another second-place finish, with the Jamaican sprinting standout stopping the clock at 11:03 seconds, as her countrywoman, Kerron Stewart, finished third in 11.07 seconds.

"I give God the glory for what I achieved tonight, I'm always thankful," said Campbell-Brown.

Stewart said: "I'm happy, any colour medal for me is a blessing. I'm coming back slowly, but surely."

All three Jamaicans are also through to today's 400 metres final, set for 8:30 p.m., with all three winning their respective semi-finals. Stephenie-Ann McPherson took her semi in 50.69 seconds, with Christine Day winning in 51.02 seconds and Novlene Williams-Mills holding off Amantle Montsho to win her semi-final in 50.73 seconds.

Also, Jamaica's Sunshine Girls were in impressive form, clobbering Malawi 81-50 in a crucial Pool A game at the Scottish Exhibition and Conference Centre.