FULL BLAST! Williams-Mills ready 'to lay it all out on track' 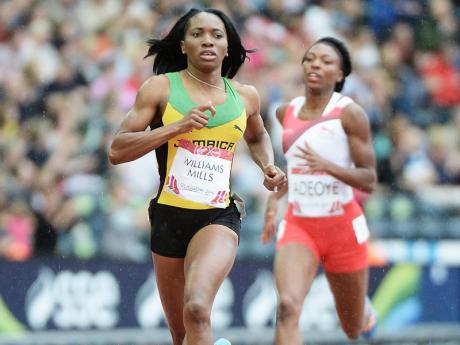 After wins in her heat and semi-final, Jamaican quarter-miler Novlene Williams-Mills is hoping to make it three from three today when she lines up in the women's 400m final at the Commonwealth Games at Hampden Park.

Williams-Mills won her heat in an easy 52.39 seconds on Sunday, before outsprinting 2011 World and defending Commonwealth Games champion Amantle Montsho, in yesterday's semi-final in 50.73 seconds.

The women's 400 metres final, which will also include two other Jamaicans - Christine Day and Stephenie-Ann McPherson - will start at 8:30 p.m. (2:30 p.m. Jamaica time).

After a third-place finish at the 2006 Commonwealth Games in Melbourne, Australia, Williams-Mills is hoping to improve her podium position here in Glasgow, noting just what it would mean to win gold.

"Tomorrow (today) I just want to give it my all and lay it out all on the track," Williams-Mills told The Gleaner. "I'm very pleased that I qualified for the final and I have to give God thanks for bringing me through these rounds and for taking me here and I'm just happy."

Williams-Mills, who has won three Olympic bronze medals and four World Championships silver medals - all in the 4x400m relays - added that she has been impressed with the level of competition at the Games and says she is hoping to win her first individual gold medal at a major international championships, after a rough two years that included a successful fight against breast cancer.

"I think the competition is great here at the Commonwealth Games. You see a lot of athletes going out there putting out season bests and personal best times, so I think it's going great and there is a lot of competition for medals here," Williams-Mills said.

"It would mean everything to me, especially in the past two years when I just didn't want to come back to the track. So getting that gold medal would mean so much to me and I am really looking to go out there and give it my best shot in the final."