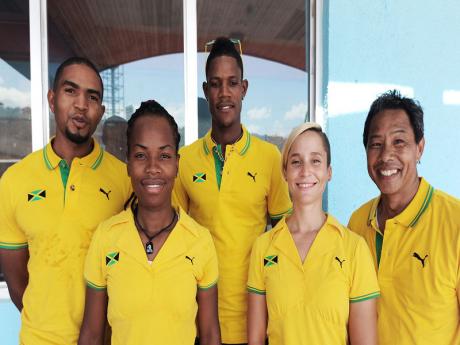 President of the Jamaica Cycling Federation (JCF) and manager of Jamaica's team at the Commonwealth Games in Glasgow, Arthur Tenn, is encouraged by much of what he has seen from his riders here, but knows it's a long road for locals to winning medals at the world level.

Jamaica sent a team of five riders to Glasgow, with Marloe Rodman's qualification for two finals at the Sir Chris Hoy Velodrome highlighting the team's participation.

With two female riders here and Robert Barnes set to compete in the mountain cross competition today, there has also been more diversity in this unit compared to others in the recent past. Despite the positives, Tenn is under no delusions about the work that faces the association in the coming years.

"For cycling, we have had some really good competition. In fact, I think it's almost close to a World Championships here in terms of the quality that we have seen," Tenn told The Gleaner yesterday from the Athletes' Village.

Rodman didn't finish the 20km scratch race and finished in the blue band in the 40km points race, and though Tenn is a bit disappointed with the outcome in the final, he believes simply getting to the final was a major achievement for 26-year-old Rodman.

"He (Rodman) made the finals for two events, the scratch race and the points race. We are a bit disappointed with the results in the finals, but for us it's the big goal in him reaching the final and we are very pleased with that," said Tenn.

The JCF president also believes that the island's female riders have benefited significantly through the experience gained.

Dahlia Palmer finished 12th in the women's 500m time trial and 13th in the sprint qualifying, while Bianca Hernould took 19th in the 3000m individual pursuit qualifying before failing to finish in the 10km scratch race final.

"It's been a real eye-opener for both of them and now they can see how much work and effort they need to put in to be competitive at that level and it will give them more motivation and inspiration to work harder over the next few years," Tenn said.

Still, the administrator is well aware that a lot of work will have to be put into lifting the standard of Jamaican cycling in coming years.

"It's going to be a long road to develop the sport, but we have to start. Myself and Ricardo Lynch (rider and coach), we have been speaking with people who have ideas and when we go back home we will try to implement that. It's very difficult, but we have to try and move forward with cycling," Tenn emphasised.

"Look at Rodman, he is mostly based in Jamaica, but because we do not have enough cycling in Jamaica, a lot of time he has to travel to get races to qualify and that can be very costly. With the Olympics coming up, he will have to travel for qualifying races to try and qualify for the Olympics and that is going to be very stressful financially, and you know the economics, it's going to be very costly and it's hard to get sponsorship," Tenn lamented.

Jamaica will also compete in the road competition, with Barnes set to have his mountain cross ride today at Cathkin Braes.