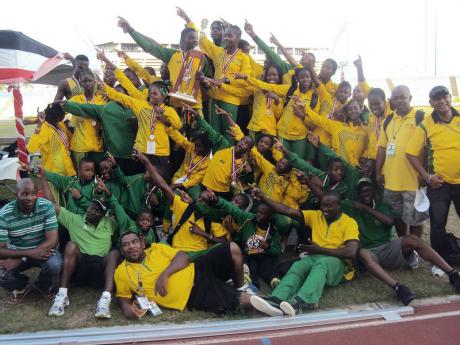 Members of Jamaica's team to the Caribbean Union of Teachers' C(CUT) Track and Field Championships celebrate their victory at the Hasely Crawford Stadium in Trinidad. - Contributed

Jamaica accounted for 13 of 27 championship records over two days, winning 50 medals - 31 gold, 14 silver and five bronze - and racking up 587 points to win the Caribbean Union of Teachers (CUT) for the fifth time in the last six years.

The regions' finest athletes, aged nine to 15, battled like gladiators at the 16th biennial championships, which took place at the Hasley Crawford Stadium in Trinidad last weekend.

Barbados ended second with 454 points, with Trinidad and Tobago third on 226. St Vincent and the Grenadines (217.50) and St Kitts (175) ended fourth and fifth, respectively.

Prior to their departure, Jamaica's team of 40 athletes (20 boys and 20 girls), their coaching staff, administrators and coordinators had promised to outshine their rivals; and they delivered just that.

He added that the athletes' discipline and exemplary performances shone bright.

Similarly, Jamaica's coach, Arthur Edwards, believes the entire team should be commended for their outstanding performance.

"We are very proud of all - athletes, management staff, coaching staff, the Jamaica Teachers Association (JTA), all our sponsors, and parents," said Edwards.

He highlighted that this year's win is quite special and important.

"Winning is a part of our DNA in sports. We always give it our best shot whenever we get the opportunity to. In the process, we established 13 new records out of the 27 established over the two days," Edwards said.

Jamaica's team manger also took time to reflect on the next CUT championship in 2016.

"We look forward to 2016, despite knowing we will lose members of the team in a number of age groups. But we will win, maybe not by 137 points, but more," Johnson said.