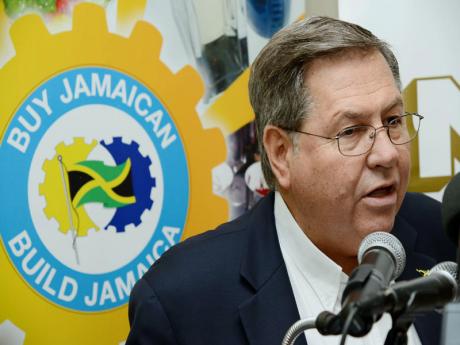 The Jamaica Manufac-turers' Association (JMA) and the Jamaica National Building Society (JNBS) have joined forces to make foreign exchange better available to small and medium-size manufacturers in an arrangement that will see the Society setting aside US$100,000 monthly for their use.

The arrangement, the JMA/JNBS Special Member FX Window, takes effect on August 4, 2014, and will initially run for five months, following which, both entities will decide on the profitability of the arrangement and whether it will continue.

"Manufactures have been experiencing difficulties sourcing foreign exchange since 2013, as a result of the decline in the value of the Jamaican dollar and conditions of the International Monetary Fund agreement," JMA President Brian Pengelley said, noting the association's repeated call on the Government for a special facility for manufacturers.

"The partnership with JNBS is significant to the manufacturing sector, as foreign exchange is needed to pay our international suppliers for raw and packaging materials used in the production process and to service foreign currency liabilities," the JMA head said.

Manufacturers will, however, need to become members of the JMA to qualify for the special facility.

"We encourage manufacturers that are not members of the JMA to sign up to become members, and urge members that are not fully paid up to settle their balances to access up to US$100,000 monthly per company through this special window," Pengelley said.

The JNBS will also provide discounts, depending on the value of purchase and other requirements which were not specified.

Essentially, JNBS will pull the money needed for the arrangement from the available sum of foreign exchange for general distribution, JNBS General Manager Earl Jarrett told Wednesday Business following the launch of the service at the JMA's headquarters in Kingston on Monday.

"We earn foreign exchange every single day. We represent about 20 per cent of all remittances that come into the country, (so) we have a regular flow," Jarrett said.

"Not only do we enjoy remittance, but a number of members overseas save here, and they save in Jamaican currency, those that send foreign exchange. So we have a very effective integrated system that enables us, through our export of services, to earn foreign exchange. It's that foreign exchange that we have earned that we are going to be making available to the productive sector," said Jarrett.

JNBS will apply a discount to the existing market rate on the day of about 20 to 50 cents per dollar under the arrangement for the manufacturers, he said.

"The exchange rate will be market determined based on market conditions on the day. However, a discount will be applied, ranging between 20 to 50 cents, depending on the volume of purchase and the other businesses that they have with JNBS," Jarrett said.

Meanwhile, Pengelley renewed his call for the stabilisation of the local currency. While the Special Member FX Window is expected to address the foreign exchange availability concerns for manufacturers, he said, "the continued dollar slide creates uncertainty, as it makes it hard for manufacturers to forecast, and puts pressure on us to find more Jamaica dollars to purchase the same amount of US dollars."