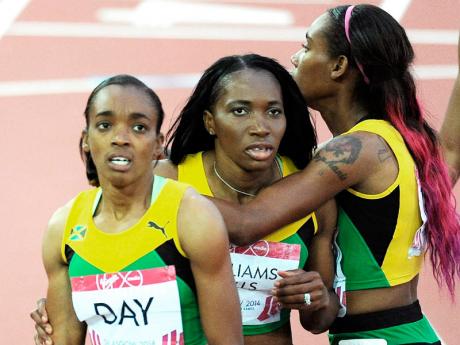 SWEEP: Stephenie-Ann McPherson (right) wins the women's 400 metres final ahead of compatriots Novlene Williams-Mills (left) and Christine Day at the Commonwealth Games at Hampden Park, Scotland, yesterday. Jamaica became the first country to win all three medals in the one-lap event at these Games. 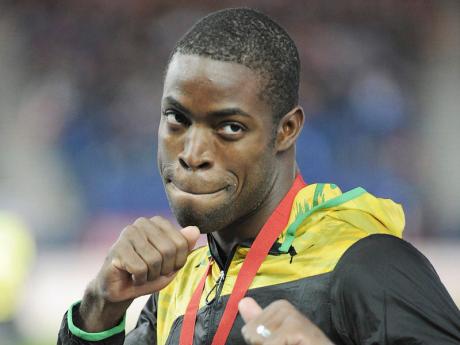 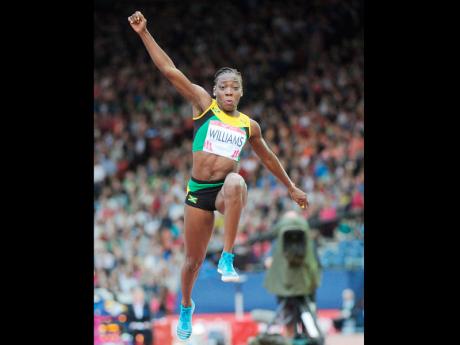 The writing was on the wall. From heats to final, if a Jamaican was in a women's 400m race at the 2014 Commonwealth Games, she would be the first across the finish line.

Gold, silver and bronze. It had never been done before in this event at these Games.

And to top it off, Jamaica won more gold medals - two - in the women's triple jump, through Kimberly Williams, who leapt 14.21 metres; and the 110m hurdles, with Andrew Riley, who clocked 13.32 seconds.

In the historic women's 400 finish, McPherson was the first to crash the line, stopping the clock in 50.67, pacing herself and waiting for the right moment to strike.

Williams-Mills, drawn in lane five, had gone out hard like a freight train, pulled along by the defending champion and 2011 World champion, Amantle Montsho of Botswana, running in lane six.

At the top of the straight, McPherson saw her opportunity, found another gear, and pulled the experienced pair back, with Day running on late to clip Montsho on the line to secure the monumental trifecta.

McPherson, who became the first Jamaican to win the event at the Commonwealth Games since Sandie Richards struck gold in 1998 in Kuala Lumpur, said that the trio really wanted to take all three medals and believes it's a great platform for her continued development.

"The three of us came out here with the intention to go one-two-three, and we did that, so I'm very happy," said McPherson. "It's a good place to win first. Christine Ohuruogu won here at the Commonwealth Games first, so, hopefully, I can follow in her footsteps."

British star Ohuruogu went on to win Olympic and World Championships gold in the 400 metres.

"I came here not exactly fit, but with my coach's instructions, I came here with a lion's heart determined to do my best," added McPherson, a finalist at last year's World Championships.

"For the whole season, I've been practising different ways to run the 400m, but I got the perfect one this time. I came out here with a race plan and did just what my coach asked of me."

Williams-Mills, who became the fifth athlete to win multiple medals in this event, after her bronze at the 2006 Melbourne Games, was a little disappointed not to have won, but excited for her teammates and the historic achievement.

"I'm happy. I came out here to run and I think I went out there and gave it my all," said Williams-Mills. "I'm a little bit disappointed, but maybe it wasn't in God's plans for me to get that gold medal today. But I'm still very happy with the outcome."

She added: "I'm very happy for Christine and Stephenie that we came out here and put on a good show for everyone."

For Day, it was a welcome first individual medal and one that underscores her ethos to keep pressing in the face of difficulties and disappointments.

"This motivates me a lot, and no matter the obstacles in the way, you learn never to give up and work towards your dream," said Day.

"Before we came out here, we were talking about the one-two-three, and when I realised that I wasn't in the medal position, I just kept swinging, even though my arms were wide. This type of climate is hard for me because I'm normally numb, but I thank God that I was able to pull through and get this medal," Day added.

Jamaica now equals the records for most gold medals in the women's 400 metres, with three (equal with Australia), and most total medals, with eight, equal with England.

In the sand pit, triple jumper Williams, the World Indoor bronze medallist, had her fair share of troubles, fouling three times in her series before capping off her victory with a season's best 14.21-metre hop, skip and jump.

By then, the gold medal had already been won.

The triumph comes as confirmation of her development as a leading triple jumper in the world, the new piece of silverware going nicely with a solid season that has seen her in the top three in all but one of her eight appearances.

"At the start of the year, I said I wanted to come to the Commonwealth Games and win. I really didn't care about the distance, so I'm pretty pleased with my performance here," Williams said.

The second Jamaican in the final, Shenieka Thompson, took fourth, with 13.85 metres. England's Laura Samuel, 14.09 metres, was second, with Trinidad and Tobago's Ayanna Alexander taking the bronze, with 14.01 metres.

The gold rush continued in the 110m hurdles final, where Riley recovered from an untidy mid-race to clip England's William Sherman, who clocked 13.36 seconds, with Barbados' Shane Brathwaite (13.49) taking third.

"I've been having a lot of ups and downs this season, and I thank God for helping me to claim my first championships. I am grateful for it and it's an important stepping stone for me," said Riley, echoing the sentiments of a group of Jamaicans who took Scotland's Hampden Park by storm.