13 praised by GG for part in nation building 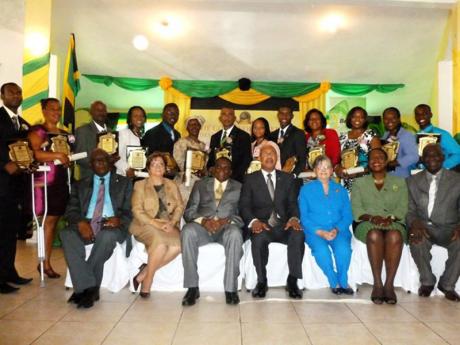 Recipients of the Governor General Achievement Award for Middlesex. - PHOTO BY ORANTES MOORE

THIRTEEN RESIDENTS of the county of Middlesex were last Thursday lauded by Governor General Sir Patrick Allen for their contribution to nation building.

The individuals were recipients of a programme hosted by Sir Patrick which comprises two elements - The Governor General's Achievement Award (GGAA), and a service-orientated programme, the I Believe Initiative (IBI) - and was initially launched in 1991 by former Governor General Sir Howard Cooke, who passed away earlier this month.

The scheme pays tribute to adults that have made significant achievements despite challenging socio-economic conditions, and young people who have excelled in academia, service or made a substantial contribution either in Jamaica or across the diaspora.

Speaking to the 13 recipients, Sir Patrick said: "To all of you, today can be attributed the statement of Dr Martin Luther King Jr that: "... all labour that uplifts humanity has dignity and should be undertaken with painstaking excellence."

"It is our expectation and that of your community members that you will continue to be engaged in activities that will help to better the life and the lot of this nation - especially through your involvement with the youth.

He added: "I have faith that each of you will remain steadfast and transmit the message of selflessness, good neighbourliness, honesty, perseverance and commitment to excellence at all times. Only the best is good enough.

"During a scholarship interview, a young man said that in his estimation '...one can only repay for the gift of life by doing something useful that improves the quality of life for others'.

"Needless to say, with that profound statement, he made inroads and won the hearts of the panel. If more Jamaicans believe in and exercise our God-given potential to become part of the solutions to the problems our country faces, we would be well on the way to achieving the transformation we all want."