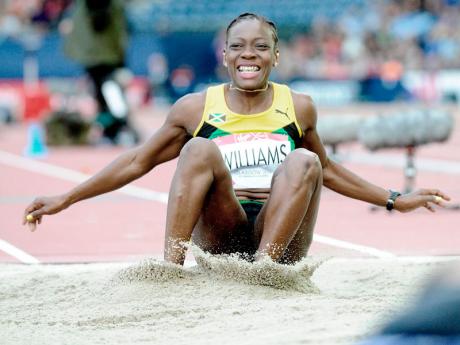 Jamaica's Kimberly Williams is a picture of joy as she lands in the pit while competing in the women's triple jump final at the Commonwealth Games at Hampden Park, Scotland, yesterday. Williams won gold with 14.21 metres. - photos by Ricardo Makyn/Staff Photographer 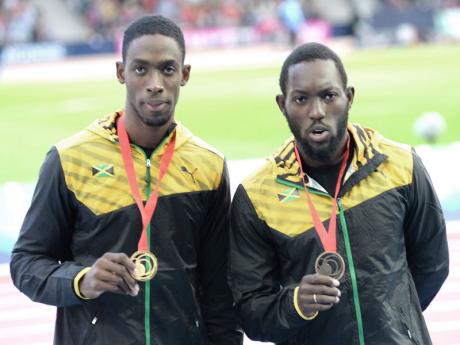 Sprinters Kemar Bailey-Cole (left) and Nickel Ashmeade display their medals after the presentation ceremony for the men's 100 metres at the Commonwealth Games at Hampden Park, Scotland, yesterday. Bailey-Cole won the gold medal in Monday night's final, while Ashmeade claimed bronze.
1
2

Glasgow, cue the Bob Marley, the Jamaicans are taking over!

Several Bob Marley reggae anthems, including the iconic One Love, blasted through the Hampden Park speaker system as Stephenie-Ann McPherson pulled off a perfectly timed last 120-metre assault to lead home an unprecedented Jamaican one, two, three in the women's one-lap final.

"I came here not exactly fit, but with my coach's instructions, I came here with a Lion's heart, determined to do my best, and I'm very happy to have won this gold medal here," said McPherson.

She noted that all three athletes wanted desperately to ensure that Jamaica won all three medals on offer.

McPherson became the first Jamaican winner in the event since Sandie Richards in Kuala Lumpur in 1998.

Triple jumper Williams, the World Indoor bronze medallist, had her fair share of troubles in the pit, fouling three times in her series, before capping off victory with a season-best 14.21-metre hop, skip and jump.

By then, the gold medal had already been won.

"At the start of the year, I said I wanted to come to the Commonwealth Games and win; I really didn't care about the distance, so I'm pretty pleased with my performance here," Williams said.

The second Jamaican in the final, Shenieka Thompson, took fourth with 13.85 metres. England's Laura Samuel, 14.09 metres, was second, with Trinidad and Tobago's Ayanna Alexander taking the bronze with 14.01 metres.

"I've been having a lot of ups and downs this season, and I thank God for helping me to claim my first championships. I am grateful for it, and it's an important stepping stone for me," said Riley.

Rusheen McDonald, 45.95 seconds, and Akheem Gauntlett, 46.16 seconds, finished fourth and fifth in their respective 400m semi-finals and failed to advance to the final.

Also, yesterday, Kaliese Spencer posted the fastest time, 55.45 seconds, in qualifying for tomorrow's 400 metres hurdles final, with young Janieve Russell also securing a lane with a 56.18 clocking, as both won their respective heats.

Ricardo Cunningham is also through to today's men's 800m semi-final after finishing third in his heat with a season-best 1:47.71.

Olympic and World Champion-ships medallist Warren Weir will be among the Jamaicans in action today, as he makes his first appearance here in the men's 200m heats at 10:16 a.m. (4:16 a.m.).

Jamaica's Sunshine Girls will today play New Zealand at 11:30 a.m. (5:30 a.m.) for top spot in Pool A and the chance to more than likely face England in Saturday's semi-final, with Australia set to top the points in Pool B.

In badminton, Gareth Henry got the better of Georges Paul (Mauritius) 2-1 at the Emirates Arena in men's singles Round-of-64 action, while Jamaica's other male competitor, Garron Palmer, suffered a 1-2 loss to Sahir Edoo, also from Mauritius.

Palmer and Henry then teamed up to better Kenya's Patrick Mbogo and Joseph Githitu 2-0, with Henry then teaming up with his sister, Geordine, to defeat Seychelles' Allisen Camille and Steve Malcouzanne in mixed doubles action.

Williams and Palmer, however, went down 0-2 to Barbados' Miriama Eastmond and Dakeil Thorpe in their mixed doubles encounter.

There were two wins for Kane Watson, Simon Tomlinson and Shenique Clare in singles table tennis action at Scotstoun Sports Campus, while Yvonne Foster had a win and a loss. It was, however, a tough day for 13-year-old Dadrian Lewis, who lost her singles matches 4-1 and 4-0, while Christopher Marsh also failed to get a win yesterday.