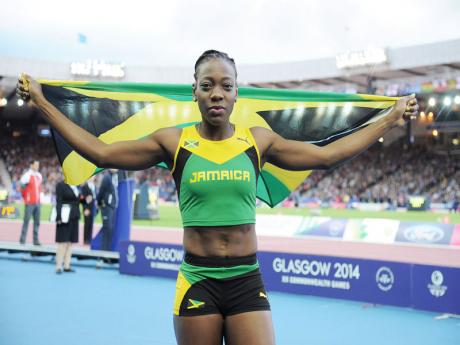 Jamaican triple jumper Kimberly Williams had always wanted to stand on top of a podium, wondering to herself on many occasions what it would feel like to watch the flag hoisted and the anthem blaring in the background.

She also always wanted to experience a victory lap - something she almost didn't get a chance to do despite wining gold in the women's triple jump at the Commonwealth Games at Hampden Park yesterday.

Williams posted a season best 14.21 metres jump on her last attempt to put the exclamation mark on a victory that was already secured after silver medallist Laura Samuel (England) - with a 14.09-metre effort to her credit - failed to better her previous best of 14.11 metres. The bronze medal went to Trinidad and Tobago's Ayanna Alexander, 14.01 metres.

The World Indoors bronze medallist - now an established contender on the international circuit was determined to fulfil her dream.

So when an official told her and the other medallists that they would have to skip the victory lap because of time concerns with their medal ceremony scheduled only a few minutes later, Williams and the others would not have it.

"It felt good to do my first victory lap, I always wanted to do that. The officials didn't want us to take a lap and all three of us girls said that we would," Williams smiled. "It felt good to see the flag going up. I always dreamed about what it would feel like to hear the anthem playing and all of that. Thank God I didn't cry, I was just here singing in my mind."

Williams added: "My mother must be proud, and my grandmother and everyone else who have always supported me."

The 25-year-old continued: "I got World Indoor bronze, I'm climbing the ladder, so next year we will see what happens. I just want to continue to work hard and be patient and wait on my time.

"At the start of the year, I said I wanted to come to the Commonwealth Games and win, I really didn't care about the distance, so I'm pretty pleased with my performance," she said.

"There's the Olympics at the top; one day I want to be Olympic champion. We will see what happens in 2016 - are you excited? I'm excited," she laughed.

This is Jamaica's third straight gold medal in the women's triple jump at the Commonwealth Games after Trecia Smith's back-to-back wins in 2006 and 2010.