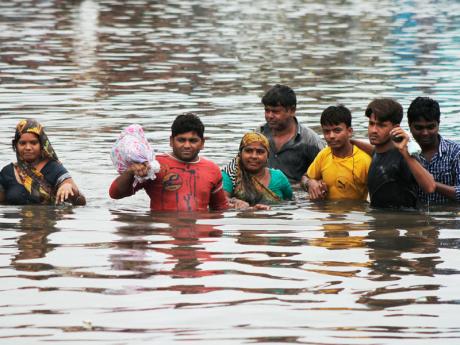 Indians wade through a waterlogged street in Ahmadabad, India, yesterday.

Torrential rains triggered a massive landslide that buried a remote village in western India yesterday, killing at least 17 people as it swept away scores of houses and possibly trapping many more people under debris, officials said.

Rescuers planned to work overnight using floodlights mounted on two jeeps being sent from Pune along with earthmoving vehicles, according to Suresh Jadhav, a district official.

He said 17 bodies had been recovered from under mud, rocks, trees and other debris. "Everything on the mountain came down," he said.

But with 70 homes buried and reports of another 158 hit by the landslide, rescuers anticipated more dead in the village, home to 704 people in the foothills of the Sahyadri Mountains.

The landslide hit early morning, but details of the damage only began to trickle out several hours later. The area received 10.8 centimetres (4.25 inches) of rain on Tuesday, with a heavy downpour continuing through yesterday.

A lack of Internet connectivity and poor cell phone service were also hampering the rescue operation.

"It's surrounded by hills and the area is very remote and rural, so it's taking us time to get there," Avasthy said.

Some 250 disaster response personnel were in the area assisting local police and medical teams who began clearing the debris. At least 100 ambulances were also sent to the area, Jadhav said. Landslides are common in the area during the monsoon season, which runs from June through September.

Pune district is about 150 kilometres (95 miles) southeast of Mumbai, India's commercial capital. The nearest medical centre is about 15 kilometres (9 miles) from the village.

Last year, more than 6,000 people were killed as floods and landslides swept through the hilly northern state of Uttarakhand during the monsoon season.