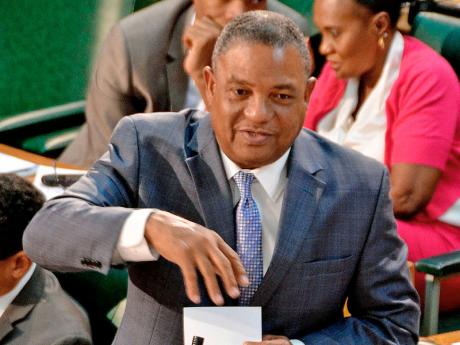 THE PROPOSED new procurement law, which the Government is seeking to have in place by the end of September, will contain a clause for negligent public-sector workers who, through their actions, cause a deficiency or loss of funds as a result of breach of the rules to repay the money.

A procurement bill, tabled in the House of Representatives on Tuesday, is proposing that where an officer or employee of a procuring entity has been responsible for engaging a method of public procurement in contravention of the law that resulted in a loss of public funds or deficiency, a surcharge should be levied against him.

The bill, however, states that the financial secretary may surcharge that person an amount of money which is less than that which has been lost as a result of the action which put the country at a disadvantage.

Horace Dalley, the minister with responsibility for the public service, said in the House of Representatives that the new bill is to be sent to a joint select committee for consideration. Dalley said reforming the procurement system is of critical importance to the economy, noting that government purchase of goods and services accounts for 30 per cent of gross domestic product.

The new procurement law would see the National Contracts Commission (NCC) be separated from the Office of the Contractor General.

When the separation is effected, the NCC will be renamed the Public Procurement Commission which will be responsible for the registration and classification of contractors.

The bill proposes that persons convicted of corrupt practices be subjected to a maximum three-year prison term, if convicted in a Resident Magistrate Court, and/or a $3-million fine. If the conviction takes place in the Circuit Court, the maximum prison term is seven years.

Where a person is convicted of an offence under the Procurement Act, the court may, in addition to any penalty imposed, order the persons convicted to pay a fixed sum of compensation to any person who has suffered loss as a result of the commission of the offence.

The proposed law places a requirement for government entities to prepare a procurement plan for each financial year and to ensure that the estimate of the cost of any planned procurement is reflected in their budgets. The head of the procuring entity has overall responsibility for the procurement activities and is required to establish internal procurement committees to manage the entity's procurement process.