'It's not over' - Sunshine Girls remain confident despite NZ loss 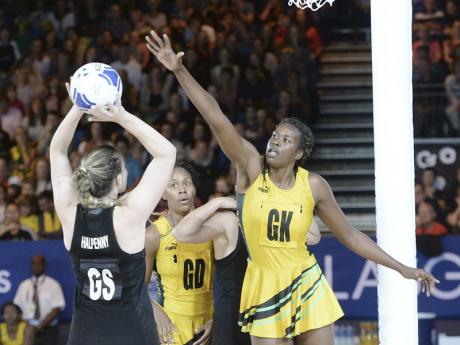 Not even the presence of sprinting royalty Usain Bolt could lift Jamaica's Sunshine Girls in their crucial face-off against defending Commonwealth Games champions New Zealand yesterday, as the Silver Ferns made the most of untidy Jamaican execution to win 50-42 at the Scottish Exhibition and Conference Centre.

The Jamaicans made a game of it for three quarters and about three minutes, even taking the lead 24-23 into half-time. However, a string of turnovers and poor decisions swung the contest in favour of the ruthless New Zealand team, with the result sending Jamaica into a semi-final against world number-one ranked Australia on Saturday.

It was the game they were hoping to avoid, but one they are facing with the greatest of optimism and determination - if the post-match comments are anything to go by.

New Zealand will face the easier opposition - at least on paper - in number-three ranked England, also on Saturday.

Jamaica's head coach, Minneth Reynolds, was quite cool about facing the Aussies, while thanking the track stars for their support and inviting them to return to the final, in which she expects Jamaica to participate on Sunday.

"They have been supporting us a lot on the court and off-court, and we certainly welcome it and we will welcome them back to the finals when we get there," said Reynolds, who is hoping, along with technical director Jill McIntosh, to lead perennial fourth-place finishers Jamaica to their second medal in netball at the Commonwealth Games, after bronze in 2002.

Bolt and the other track stars in attendance, including Kerron Stewart, Novlene Williams-Mills and Kimberly Williams, did their best to cheer on the Girls, waving flags and shouting encouragement with Jhaniele Fowler-Reid's 35 goals from 39 attempts and another sterling performance from goal shooter-turned-goalkeeper, Romelda Aiken (five defensive rebounds, one interception and two deflections) keeping them in striking distance.

"I think in this game, we made too many errors, and as a result it cost us the game. So it's really good that we made those now and not in the semi-final."

Reynolds added: "It's not over, we just need to go back, watch the tape and try to correct all the unforced errors we committed today," Reynolds added.

"We need to be more patient, steady and stay in control, keep fighting to the end. The girls have learned their lessons and we are ready to go for the semi-final. We have put that behind us, we will head into training and work on all the things we need to correct," said Reynolds.

Fowler-Reid is also looking forward to the semi-final against Australia.

"It was a well-fought game, I thought my team-mates pushed hard. We made some errors and that cost us the game, but I am happy we are in the semis. We are a confident team and we will push hard against Australia," promised Fowler-Reid.