Weir wants nothing but gold 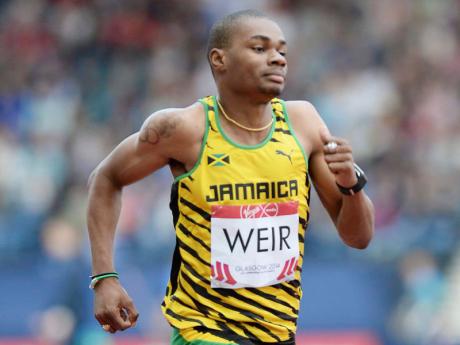 Jamaica's Warren Weir cruises to victory during the heats of the men's 200 metres at the Commonwealth Games at Hampden Park, Scotland, yesterday. - Ricardo Makyn/Staff Photographer

ALREADY with a bronze medal at the 2012 Olympic Games and a silver medal upgrade at last year's IAAF World Championships in Moscow, Jamaican 200 metres star Warren Weir walks into the 2014 Commonwealth Games with high expectations and a world of pressure to deliver gold, nothing else.

Heavy is the head that wears the crown - or so they say - and with Usain Bolt, Yohan Blake and the big Americans missing in the 200 metres here, Weir is king.

However, there was certainly no sign of pressure from the sprightly young man in the hours after his win in the heats yesterday, as he chilled with his mother Celeste in the Athletes' Village, played video games, listened to music and joked around with his friends.

Weir has looked nothing like the athlete who ran 19.82 seconds earlier this season and yesterday's win was his first in his last four races.

Still, he accepts the expectations as he braces for a competitive rush for Commonwealth 200 metres glory.

"Would it be a failure if I don't win gold? I would think so," Weir admitted. "No one wants to come from a bronze at an Olympics and silver at a World Championships and get anything but a gold medal here, so it would be a disappointment. But in every disappointment, there is a lesson."

Back to winning ways

"It's good to be back to winning ways. It wasn't a full field, but I just went there to qualify and to do so as easily as possible because the final and semi-finals are on the same day (today), so it's about conserving as much energy as possible while advancing," Weir said.

Weir, who has a personal best of 19.79 seconds, says he is determined to fight for that top podium spot.

"For me, competition is exciting. It doesn't matter where it is, it really excites me. I love to compete, I don't compete as much in a championship as I did in high school, so I'm always excited every time I get to do so," added Weir, between a light-hearted debate with fellow athletes Leford Green and Richards Phillips - the topic: FIFA 14.

"This is how I deal with pressure, chill wid mi bredren dem, play video games, listen to music, just be myself," Weir shared.

"Some people may think it's distracting or whatever, but this is what keeps the mind settled and relaxed. I've seen other athletes doing some ridiculous things, but for me it's just about being myself. Whatever I do on a normal day, I still do it, but just before competition time, I zone out. But you have to learn to keep the mind clear and have fun," Weir said, now propped up on a lime green beanie bag.

"Plus, it's always exciting to have Moms around," he said, referring to his mother, who looks on, then smiles. "She was always there locally, but now it's great to have her around travelling with me internationally; it's a great feeling. We have come a far way, and to have her here with me is a special feeling.

He will need to be ready today for what is one of the most open 200 metre final at a major championship in recent times.

"Anyone in the final is deserving to be there and anyone can give you a surprise on that day. Expect the unexpected in sports, anyone can show up on a particular day, so you have to be prepared and give your 100 per cent or 200 per cent best and run like it's your last race," Weir said.