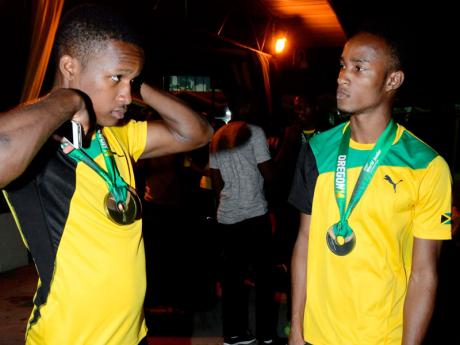 Jaheel Hyde (left) adjusts his medal around his neck as he stands with Tyler Mason at the Norman Manley International Airport on Monday night, upon their return from the World Junior Championships in Athletics in Eugene, Oregon, United States. - Winston Sill/Freelance Photographer 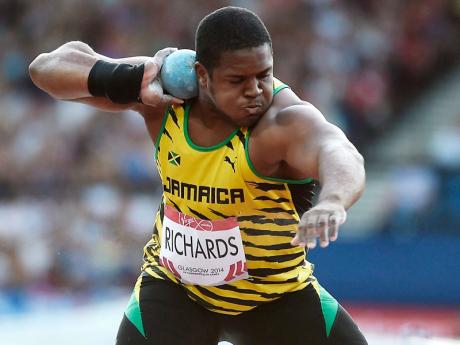 From the World Junior Championships to the Commonwealth Games, Jamaica is enjoying another Indian summer in sport.

Despite some hitches, Jamaica's World Junior team did things that made history last week. Jamaican sports history was made in Glasgow, host city of the Games, by Odayne Richards in the shot put.

Richards takes pride of place. The St George's College/University of Technology graduate hijacked fancied putters from New Zealand and Canada with a national record of 21.61 metres. The old mark belonged to 2006 and 2010 runner-up Dorian Scott.

Coached by former Wolmer's star, Linval Swaby, at the MVP Track Club, he is the first Jamaican to win a throwing event at these Games.

Later in the same day, Kemar Bailey-Cole made history by winning the 100 for Jamaica. The last time one country won the event three times in a row was when Jamaica's Donald Quarrie triumphed in 1970, 1974 and 1978. Kemar follows the 2006 and 2010 winners Asafa Powell and Lerone Clarke into Commonwealth sprint history.

A late journey from Kingston to Eugene, Oregon flattened the chances of our boys in the 100 and 400 metres at the World Junior Championships.

Once they settled, the team zoomed into history too at the World Juniors.

Jaheel Hyde of Wolmers' Boys became the first Jamaican to win the boys 400 hurdles. He did it in style, cutting his own national junior record to 49.29 seconds.

Remarkably, when the year started, that record was 49.99 seconds by Omar McLeod.

When Tyler Mason placed second in the 110 hurdles, his time of 13.06 seconds won him the best placing by a Jamaican in the event. That surpassed the bronze medal run by Keiron Stewart in 2008.

Moreover, Mason's time is the second-fastest ever in the junior 110 hurdles, inferior only to the clocking of 12.99 seconds by Oregon winner Wilhem Belocian of France and Guadeloupe.

Finally, along with a 200 bronze from Michael O'Hara and three relay medals, our male high jumpers opened a new era. For the first time, two Jamaicans, Christoff Bryan and Clayton Brown, made the final. Both set personal bests, with Bryan's clearance of 2.24 metres matching the height made by the gold, silver and bronze medal winners.

Had the boys reached Oregon early to get acclimatised before competition began, they would almost certainly have done better in the 100 and 400 metres. As things stand, they helped Jamaica to a six-medal haul. In Glasgow, with Richards leading the way, Jamaica is on its way to a gold rush.

Hubert Lawrence has attended the Olympics in Sydney, Athens, Beijing and London.