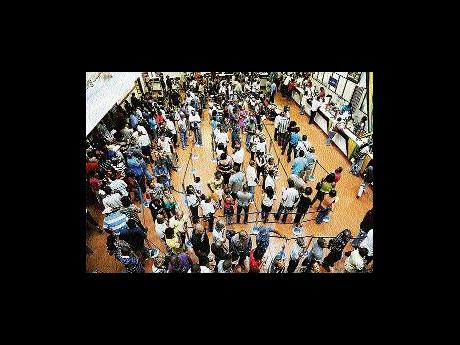 A crowd of taxpayers at the Constant Spring tax office in St Andrew. - File 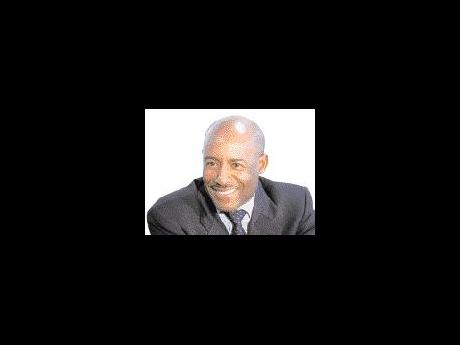 Peter Phillips has copped a lot of credit in the last few months for the way he has negotiated and managed the International Monetary Fund's (IMF) Extended Fund Facility (EFF) signed in May last year. One of the few Jamaican innovations that came as an addendum to the IMF-scripted EFF agreement, the Economic Programme Oversight Committee (EPOC), is novel and has proved to be a prominent success and ballast to the Ministry of Finance and its technocrats.

Richard Byles and his EPOC colleagues have provided a measure of monitoring and openness that has enhanced a rather difficult and even painful economic adjustment programme.

All that said, it is still largely an IMF-driven programme even though it is exclusively the responsibility of Dr Phillips, his Government, and by extension, us the Jamaican people. I would like to give the IMF less credit for the efficacy of the programme - to many Jamaicans "efficacy" is a cruel code word for "bitter", "very difficult" and at the end of this continuum of adjectives, "poisonous" economic recipe - but there are two reasons why I cannot.

First, when you look at the manner in which many of the other ministries - energy, trade and industry, even health - are run without any outside help, one quickly comes to the conclusion that the Government, as a management and governance entity, is not very good at managing.

Clearly, then, the success at the Ministry of Finance (MOF) is no doubt, in part, due to the ability and dedication of the technocrats who drive the programme. Given that similar technocrats at the other ministries which produce from shambolic (energy) to below-average and meandering nothing-ness, a significant part of the Ministry of Finance's success has to be placed on the IMF's table, constituted of guidance, strictures and encouragement.

The second reason why the not-responsible IMF has to be given a substantial amount of credit for the Ministry of Finance's success is patently obvious as one looks at what happens when the MOF is left to its own devices. Tax policy- making is a good and topical subject for the microscope.

Again, with private, and sometimes not-so-private, prodding by the IMF, the Ministry of Finance passed, in a relatively short time span, a number of important pieces of legislation between December last year and May this year. Indeed, the Fiscal Rules was an important wrap-up bill for that package of legislation.

Regrettably, in a short space of time we have seen Minister Phillips do three important and very public about-turns on three vital pieces of legislation. The first major climbdown was after he met a storm of protest against a proposed tax on each withdrawal a bank's customer would make from his or her deposits at a particular bank.

Who can forget the vociferous and unflattering notes of protest on radio talk shows, television and on social media that erupted in the government's face because of the proposed deposit-withdrawal tax a couple months ago?

In the middle of last month, the government tabled the General Consumption Tax (Amendment) Act 2014, which had as part of its objective the forcing of companies by the MOF to borrow large sums of interest-bearing money from their banks and give the Government up to six-month interest-free loans. These businesses - many of them manufacturers - would have paid GCT 10 days earlier than usual and wait up to six months, maybe more if current practice is a sign as to how the proposed refunds would be handled.

There was a howl of public and private protest from businesses led by the Jamaica Manufacturers' Association. Peter Phillips intervened and one more piece of hastily drafted legislation, which was done without consultation with relevant parties who would be affected, and done without enough careful thought, had to be reworked rather publicly and sent another signal about the haste and confusion that surrounds our tax policymaking efforts.

So last week bought the tabling and passing, given the Government's overwhelming parliamentary majority, of the Tax Collection (Miscellaneous Provisions) Bill and the Tax Penalties (Harmonisation) Bill. Well, the Opposition's spokesman on finance, Audley Shaw, used some pretty clear words in describing some provisions of the bill, especially the one that would make the commissioner general of Tax Administration in Jamaica the three-in-one prosecuting officer, judge and jury when it comes to seizing of delinquent, or allegedly delinquent, taxpayers' properties.

The president of the Private Sector Organisation of Jamaica, Chris Zacca, expressed his organisation's concern and legal luminaries gave their opposing opinions. These reactions drove the MOF into Orwellian newspeak mode. The ministry said the debate sent them to consult the Institute of Chartered Accountants - why wasn't this done before? This is what we got from the Ministry of Finance. "While we are entirely satisfied, based on legal advice received, that the measures contained in the bills as they now stand are entirely appropriate, and in keeping with international best practice within Commonwealth countries, it has nevertheless been decided to move an amendment which will ensure that no lien could be registered without a specific order of the court."

Translation: we did not consult with the people who would be most affected, nor with experts, and so we botched the drafting and produced a very bad piece of legislation. Since the Commonwealth Games are in progress, we, the MOF, will use them as our excuse for an embarrassing about-face and climbdown.

Aubyn Hill is the CEO of Corporate Strategies Limited and chairman of the Economic Advisory Council of the Opposition Leader.Email: writerhill@gmail.comTwitter:@HillaubynFacebook: www.facebook.com/Corporate.Strategies