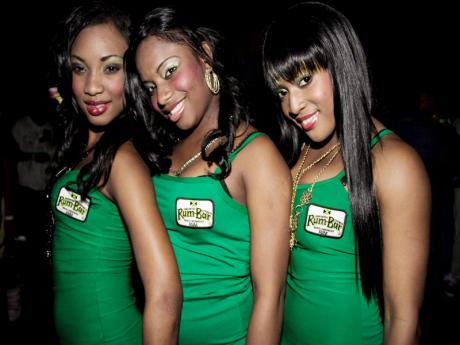 The Rum-Bar ladies are all smiles. - Contributed

The Portmore Society is hosting IMAGE for the second year, as part of the Rum-Bar Flex Week package. It will be held at Board Walk Beach Tuesday, August 5, from 8 p.m. to 2 a.m.

Luigi, a member of the promotion team, explained the theme of this year's IMAGE. "The event's concept is 'The Culture'. Culture is defined as the ideas, customs and social behaviour of a particular people or society. IMAGE, The Culture, is about that new emerging party culture including fashion and social media, a way of living and enjoying life. We have opted for a more intimate venue, which will allow the patrons to experience this premium event on a personal level," he said.

He said IMAGE is still a mixed drinks-inclusive event. However, there will be a greater assortment of exotic mixes from Rum-Bar's newly released vodka line.

"We have also added food to this year's VIP section, catered by B & E Caterers," Luigi said.

"The buzz is high and we aim to keep it that way leading up to the day of the event. The response is great and we still have our promotional video to be released. We will also be shooting a movie of the event for post-promotion, in which our patrons are the stars. We are encouraging them to dress the part," Luigi said.