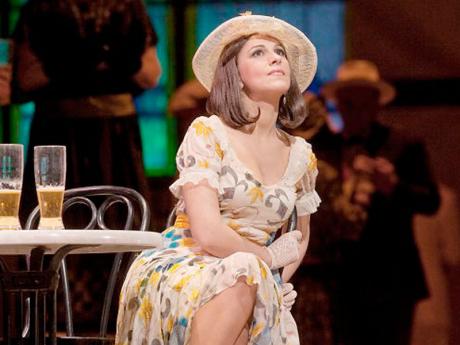 Angela Gheorghiu in the role of Magda in 'La Rondine'.

Angela Gheorghiu and Roberto Alagna star in a sophisticated romance about a kept woman who defies convention to chase a dream of romantic love with an earnest, inexperienced, young suitor. This ravishing romance is the least known work of composer Giacomo Puccini.

Act I is set in Paris in the 1920s. The wealthy Rambaldo and his mistress, Magda, are entertaining theatrical and literary friends. Prunier, a poet and the lover of Magda's maid, Lisette, declares that romantic love is back in fashion. No one, except Magda, takes him seriously. When Prunier sings a ballad he has written about a girl who rejects the love of a king, Magda sits at the piano and finishes the song, making up a second verse that tells how the girl falls in love with a student ("Chi il bel sogno di Doretta").

She thinks about her own flirtations and recalls an encounter with a young man at Bullier's restaurant. Rambaldo says he knows what love means and gives Magda a pearl necklace, which she accepts without changing her opinion that love has nothing to do with wealth. Prunier offers to read Magda's palm and predicts that she will go south in pursuit of romance and happiness, just like 'la rondine', the swallow.

Rambaldo introduces a visitor, Ruggero, the son of a childhood friend, who is new to Paris and wants to know where to spend the evening. They decide on Bullier's and Ruggero leaves to go there. Lisette, flirting with Prunier, tells him that it is her night off and the two follow Ruggero. As the guests depart, Magda decides to remain at home, then changes her mind. She dresses as a shop girl and leaves, confident that no one will recognise her and ready for an adventure at the restaurant.

Met Summer Encores will play at Palace Cineplex and Palace Multiplex until September 28.

The Enchanted Island. Featuring ensembles by Handel, Vivaldi, Rameau, Purcell, and others.