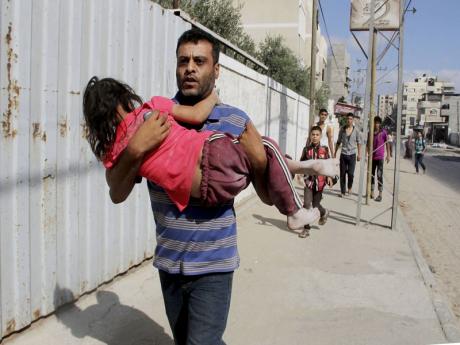 A Palestinian medic carries a child, wounded in an Israeli strike, into the emergency room at Shifa Hospital, in Gaza City, northern Gaza Strip, yesterday.

Palestinian President Mahmoud Abbas is seeking written pledges of support from all political factions, including rival Hamas, before making any attempt to press for possible war-crimes charges against Israel, senior officials disclosed yesterday.

Abbas hesitated in the past because such a step would transform his relations with Israel from tense to openly hostile, and could put him on a collision course with the United States.

But with nearly 1,400 Palestinians killed in Israel-Hamas fighting in Gaza in the past 24 days, according to health officials, Abbas is under growing domestic pressure to turn to the International Criminal Court to try to make a case against Israel.

Israeli officials have said Israel is acting in self-defence by targeting Hamas' military arsenal and rocking launching sites, and have accused Hamas of using Gaza civilians as human shields.

Both sides accused of war crimes

She said Israel has defied international law in Gaza by attacking civilian areas with schools, hospitals, homes and UN facilities.

"None of this appears to me to be accidental," Pillay said of Israel at a news conference in Geneva to mark the end of her six-year term. "They appear to be defying, in deliberate defiance of, obligations that international law imposes on Israel."

She also criticised Israel's strikes on Gaza's power plant, sewer systems and water wells as part of a similar pattern of destruction during the 2009 Gaza war.