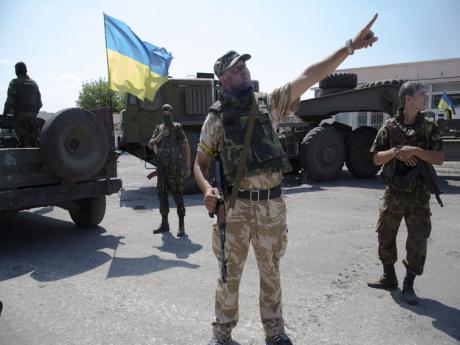 A Ukrainian government army's soldier gestures at a checkpoint in the village of Debaltseve, Donetsk region, eastern Ukraine yesterday.

As fighting raged in eastern Ukraine, an international team of investigators yesterday reached the crash site of the Malaysia Airline Flight 17 and got a first look at where it was brought down by a missile two weeks ago.

Clashes along routes to the wreckage site between government troops and pro-Russian separatist rebels had kept the delegation from reaching the area to retrieve bodies that have been lying in open fields where midsummer temperatures have hovered around 90 degrees (32 degrees Celsius) for the last several weeks.

But the investigators were allowed early yesterday afternoon through a checkpoint leading to the crash site at the village of Rozsypne by a rifle-toting militiaman who then fired a warning shot to prevent reporters from accompanying the convoy.

The militiaman, who gave his name only as Sergei, said there was still fighting happening in Rozsypne as the Ukrainian army continues an offensive to take back swatches of territory from the rebels.

The team of police and forensic experts, which comprises members from The Netherlands and Australia, is expected to initially focus their efforts on retrieving bodies still on the site and collecting victims' belongings.

As many as 80 bodies are still at the site, said Australian Foreign Minister Julie Bishop, speaking to the Australian Broadcasting Corporation from Ukraine.

Ukrainian national security spokesman Andriy Lysenko said a "day of quiet" was declared yesterday in response to a call for a cease-fire from UN Secretary General Ban Ki-moon.