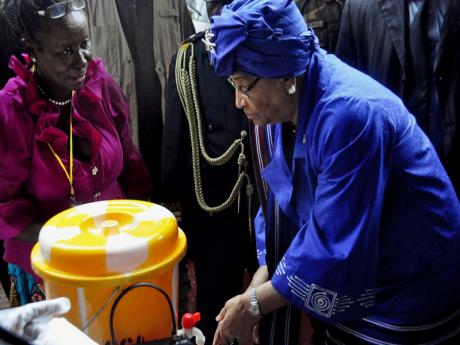 Liberia President Ellen Johnson Sirleaf (right) demonstrates to people how to wash their hands properly in order to prevent the spread of the Ebola virus.

In Sierra Leone, President Ernest Bai Koroma vowed to quarantine sick patients at home and have authorities conduct house-to-house searches for others who may have been exposed as the country struggles with families resisting treatment at isolation centres. Some have kept loved ones at home, given the high death rates at clinics where Ebola patients are quarantined.

His announcement late Wednesday came as neighbouring Liberia also ramped up its efforts to slow the virulent disease's spread, shutting down schools and ordering most public servants to stay home from work.

The United States Peace Corps also was evacuating hundreds of its volunteers in the affected countries. Two Peace Corps workers are under isolation outside the US after having contact with a person who later died of the Ebola virus, a State Department official said.

Ebola now has been blamed for 729 deaths in four West African countries this year, and has shown no signs of slowing down, particularly in Liberia and Sierra Leone. Yesterday, the WHO announced 57 new deaths, 27 in Liberia, 20 in Guinea, nine in Sierra Leone, and one in Nigeria.

Among the deaths this week was that of the chief doctor treating Ebola in Sierra Leone.