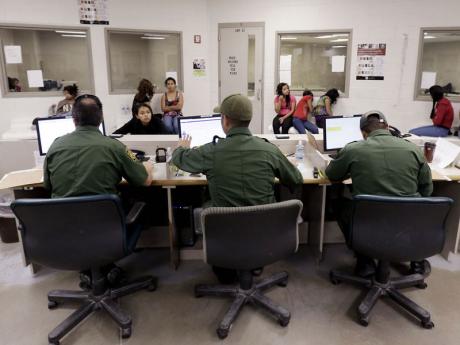 US Customs and Border Protection agents working at a processing facility in Brownsville,Texas. Immigration courts are speeding up hearings for the tens of thousands of Central American children caught on the US border.

United States (US) immigration courts are speeding up hearings for the tens of thousands of Central American children caught on the US border after criticism that the backlogged system is letting immigrants stay in the US for years while waiting for their cases to be heard.

There are 375,000 cases before the immigration courts, and many immigrants wait months or years for a hearing. Instead of bumping children to the back of that long line, the courts are now giving each child an initial court hearing within three weeks, according to the Justice Department's Executive Office for Immigration Review. A spokeswoman for the courts didn't answer questions about how many children's hearings had been set under the new plan, or which courts had scheduled additional hearings.

Immigration lawyers have long sought a speedier process to prevent immigrants from having to wait years for an answer on their asylum or residency applications. Now, as the immigration crisis has exploded into a major political issue, the concern is the opposite: that the courts are moving so quickly that the children might not have enough time to make a case that they should be allowed to remain in the country legally.

The shift came after more than 57,000 children began arriving on the border last year, fleeing violence in El Salvador, Guatemala and Honduras. After they are released from custody, the children are put into deportation proceedings and given a hearing before an immigration judge.

Advocates worry that children might not receive proper notice of hearings, and could wind up getting a deportation order if they fail to show up, immigration lawyers said. Advocates also say there aren't enough pro-bono immigration lawyers to go around and that it takes longer to prepare children's cases because it takes time to earn their trust.

"When the hearing date is three months out, it's no big deal, it's plenty of time to get yourself a lawyer. When it's three weeks, that's nowhere near enough time," said Simon Sandoval-Moshenberg, an attorney with the Legal Aid Justice Center in Falls Church, Virginia.

The roll-out of the new system started in Los Angeles this week and is also being implemented in other immigration courts.

On Wednesday, Judge A. Ashley Tabaddor scanned through the list of 22 children assigned to appear in her courtroom on a special youth docket. Nearly half were there, some wearing ponytails and shorts, sitting alongside parents and other relatives. She told them to come back in September with a lawyer. Others had moved elsewhere in the country, and their cases were transferred.

Four didn't show up, but Tabaddor didn't give them deportation orders because they were only sent a notice of the hearing five days earlier.