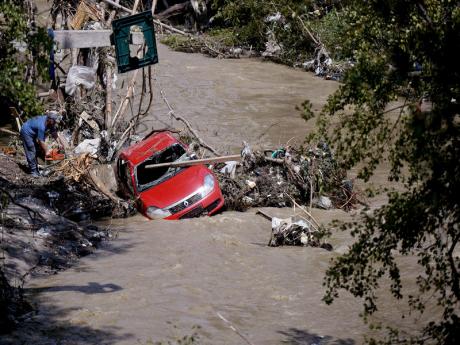 A man uses a chainsaw to cut tree stumps to free a washed up car carried downstream by the recent flash flood, in Bascov city, Arges, Romania, on Wednesday.

A second person has drowned after rivers burst their banks in Romania, authorities said yesterday, and the flooding also caused damage across the Balkans, inundating a power plant in Serbia and causing landslides in Montenegro.

Forecasters issued a severe weather warning for parts of southern Romania, which has been worst hit by the floods this week.

About 300 people were stranded by floods in a village near the Gilrot River, which burst its banks. Authorities said a man was found dead several kilometres from his home, the second person to drown in Romania from the flooding. Around 1,200 people have been evacuated, and some 2,200 homes were damaged by floods with 99 of them completely destroyed.

Central Serbia was hit by floods. A coal-mine pit that feeds one of the country's two main power plants was partly flooded and the Kostolac power plant said rushing waters blocked roads leading through the pit and flooded the machinery, but there were no major problems with electricity supplies. Streets and houses in the nearby towns of Kostolac and Pozarevac were also flooded.

Elsewhere in Serbia, storms and torrential rain flooded streets and dozens of houses and tore down trees and power cables, leaving residents in towns and villages without electricity.

Streets were flooded in most towns along the Adriatic coast in Croatia, and there were landslides in the hilly parts of Montenegro.

Romanian Environment and Climate Change Minister Attila Korodi said he would investigate whether excessive cutting of forests had caused the flooding in southern Romania.