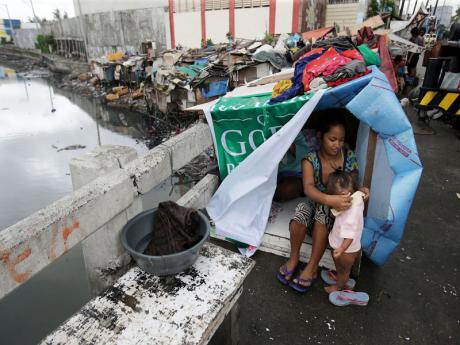 A Filipino family stays in an improvised shelter as strong waves during heavy rainfall shattered their makeshift home built under a bridge at a slum area in Manila, Philippines.

A boat carrying Indonesian villagers to their hometown to celebrate the end of Ramadan sank yesterday after hitting a stump in a river, leaving a woman and six children dead and at least 13 others missing, an official said.

National disaster agency spokesman Sutopo Purwo Nugroho said the boat ran out of fuel and was swept by the current into the stump, causing it to flip over and sink in the Barombang River in North Sumatra.

He said rescuers recovered seven bodies and are searching for 13 others. The victims were a 25-year-old woman and six children between the ages of seven months and 11 years.

Authorities are investigating reports that as many as 47 people may have been on-board the boat, Nugroho said.

It was the second fatal boat accident in three days related to celebrations of Eid al-Fitr, the holiday marking the end of the Muslim fasting month of Ramadan. Millions of Muslims across the country travel to their hometowns to celebrate the weeklong holiday with their families.

On Tuesday, a ferry capsized in the Kapuas River in Central Kalimantan, leaving 15 dead and three others missing.

Boats and ferries are popular means of transportation in the Indonesian archipelago, and accidents owing to overcrowding and poor safety standards are common.