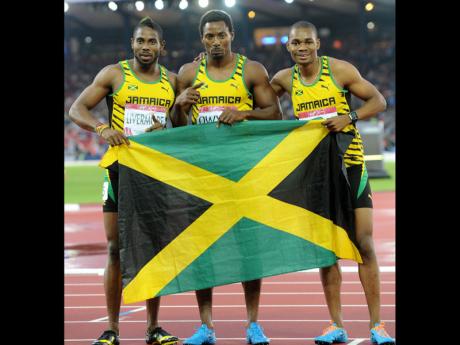 Rasheed Dwyer (centre) led a Jamaican sweep of the medals in the men's 200 metres final at the Commonwealth Games yesterday. Dwyer won in 20.14 seconds from Warren Weir (left), 20.26, and Jason Livermore, 20.32. 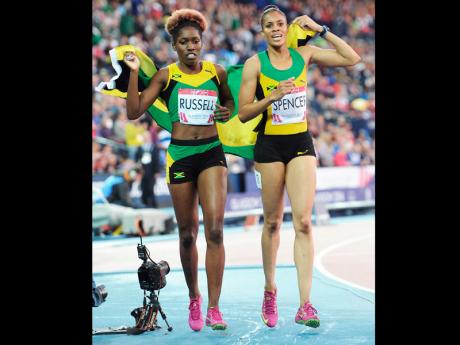 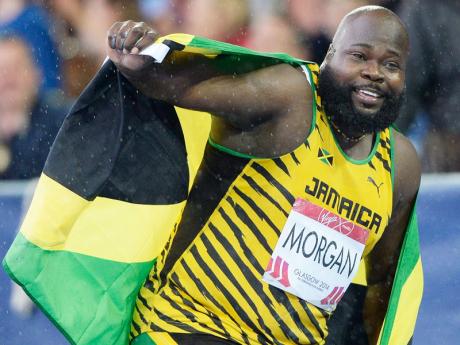 Jason Morgan is a happy man after winning a bronze medal in the men's discus yesterday.
1
2
3

Double world-record-holder Bolt is expected to feature for Jamaica in the men's 4x100m relay heats after announcing at a press conference last week that he will run in the qualification rounds of the event.

In yesterday's men's 200m final, Olympic and World Championships medallist Warren Weir could not match Dwyer on the day, as he took the silver medal, with Jason Livermore ensuring that, like it was at the London Olympic Games two years ago, it was a Jamaica-only men's 200m medal ceremony inside Hampden Park last night.

Janieve Russell and Jason Morgan added two bronze medals as the island's medal haul rose to 18 (7 gold, 4 silver, 7 bronze) with the promise of more on the horizon.

In testing conditions, Dwyer ran 20.14 seconds to hold off a determined Weir (20.26), with Livermore running strongly in the last 30m to post 20.32 and secure the island's second medal sweep at these championships after the women's 400m domination.

"Words cannot explain what I feel right now. I'm happy, elated to be Commonwealth Games champion, and this is an important stepping stone in my career," Dwyer beamed, laughing uncontrollably after his victory.

"This means a lot to me. I know it's going to be a stepping stone to my career. I'm not going to put any doubt on myself or any pressure. I will continue to remain humble and focused and compete to the best of my ability at the highest level," he added.

Weir, who took the bronze the last time three Jamaicans won the 200m at a major championships, was losing for the second time to Dwyer this season, and while he was happy for his countrymen, he admitted that he was disappointed not to have won this time around.

"It was a good race. The conditions were not very good, but I can't complain. Silver medal at the Commonwealth, I'm disappointed, but every disappointment is a lesson," Weir said. "I know that I am not where I want to be. I will just go back to the drawing board and whether the season continues or not, I will look at it as a lesson and move on."

Added Weir: "It's always good to be dominating, and to do the one-two-three on UK (United Kingdom) soil again is great."

Livermore dedicated his medal to his coach, Michael Clarke, who was taken to hospital for an unspecified reason.

Spencer had not won an individual gold medal at a major championships since winning gold at the 2006 IAAF World Championships in Beijing, and after three fourth-place finishes at the Olympics and World Championships. She was relieved to cross the line in first place in the women's 400m hurdles in a time of 54.10.

Morgan had three foul throws, but it was his second attempt that proved most valuable, as his 62.34m mark gave him bronze behind India's Vikas Shive Gowda (63.64m) and Cyprus' Apostolos Parellis (63.32m). Chad Wright was sixth with 60.33m.

There were no medals for Jamaica in the women's 200m final, with Anneisha McLaughlin (22.68), Schillonie Calvert (22.94), and Samantha Henry-Robinson (23.24) finishing fifth, sixth, and eighth in the final that was won by Nigerian star Blessing Okagbare in 22.25.

Natoya Goule (2:04.23) finished fifth in her 800m semi-final, making no further progress, while there was disaster for Annsert Whyte in the men's 400m hurdles, as he crashed into a hurdle at the top of the 100m stretch and did not finish after being in medal contention.