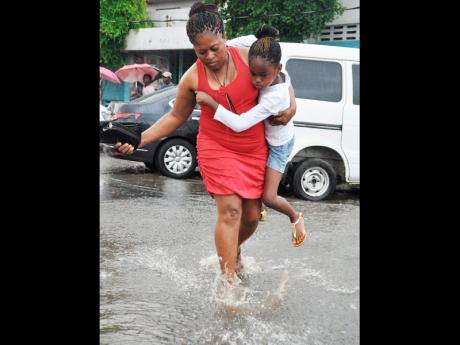 A woman and a child make their way through water in downtown Kingston yesterday as the rains came for the first time in months. - Jermaine Barnaby/Photographer

Many Jamaicans jumped for joy yesterday as heavy rains drenched sections of the country for the first time in months. But Jeffery Spooner, director of the Meteorological Service of Jamaica, said that is not enough to break the drought that the country has been experiencing.

Shouts of "Hallelujah!" were heard from persons who attended the Adolescent Gambling Prevention All-Island Poster Competition Awards Ceremony, as the rain burst the clouds during the ceremony at the Rise Life Management's offices in downtown Kingston yesterday.

Spooner said though he welcomed the rain, he was urging citizens to remain cautious.

"One shower does not break a drought. When we talk about drought it is classified comparing the rainfall for eight consecutive weeks," he said.

"We still stick with projections from the models that we are not expecting any amount of appreciable rainfall in the near future. I received a model run on Tuesday that looked at the August to September projection, and it still projected below-normal rainfall," he said.

Spooner, however, noted that some parishes, including St Elizabeth, Manchester and Westmoreland, have enjoyed an appreciable amount of rainfall, adding that the rain has gone a far way in quenching the parched conditions that the country has been encountering.