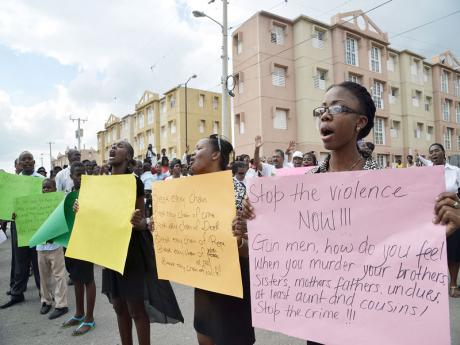 Church members show placards as they take part in a peace march through Denham Town and Tivoli Gardens in west Kingston earlier this year. - FILE

Residents of several west Kingston communities are to walk through the capital's crime hotspots today as a symbol of solidarity in reclaiming their communities from the grip of gangs, crime and violence.

The unity walk is scheduled to commence at 9 a.m., following an 8 a.m. meeting at Darling Street and Spanish Town Road on Emancipation Day, under the theme 'Taking Back Our Communities'.

Prayers will be said at specific points along the route, and a mini-rally will be held at Darling Street and Spanish Town Road following completion of the march. Here, inspirational speakers will address the attendees and musical performances will be given.

The recently formed West Kingston Planning Committee (WKPC), which has organised the walk, said it was conceived out of a need to unite the communities of Tivoli Gardens and Denham Town because of an ongoing feud between residents of the two neighbouring communities.

"We want Denham Town and Tivoli to be one, most of all. A deh so we a work pon. A deh so mi 'fraid fi go up the road," explained Alaphia Chambers, WKPC member and resident of Tivoli Gardens.

"We waan fi send a message that we want peace in the community," WKPC member Pauline Perez told The Gleaner.

The unity walk marks the committee's first major project since its inception in May of this year. It was formed as an outgrowth of weekly community meetings in west Kingston chaired by Superintendent Steve McGregor and the non-governmental organisation Peace And Love in Society.

"We're really optimistic that we're on the right track," Superintendent McGregor told The Gleaner, adding that there has not been any gang-related incident in the communities for nearly three months.

"These initiatives have gone a far way in helping what we're doing. This march will also cement it because it will signal the coordination between the people from Denham Town and Tivoli Gardens that were divided for a long while. They are now healing the wounds that they've had over time and they're working together."

Despite acknowledging that it is "early days", Superintendent McGregor said west Kingston residents were engaging the police more in organising their communities, and residents were beginning to feel safer.

The WKPC is also planning other unity-building activities within the communities for this year. These include clean-up projects and food drives for immobile residents.