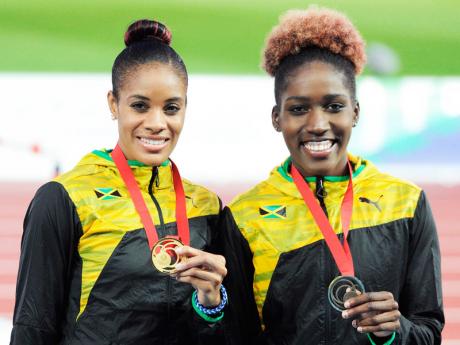 It's been eight long years and three agonising fourth-place finishes since Kaliese Spencer last won gold, but the 27-year-old was in a class of her own last night, adding 'Commonwealth Champion' to her bio after winning the women's 400m hurdles final inside Hampden Park.

Spencer, who became Jamaica's first gold medallist in the event, stopped the clock at 54.10 seconds - far from her best (52.79); but that hardly mattered for an athlete who was simply happy to have shaken the proverbial 'monkey off her back', after just missing out on podium spots at the 2009 and 2011 World Championships as well as the 2012 Olympic Games with fourth place finishes.

"It wasn't the perfect race, it wasn't the greatest time, but I'm just happy for the win," said Spencer after her golden run.

Young compatriot Janieve Russell ensured a second Jamaican spot on the podium with a 55.64 run for third place, with Scotland's Eilidh Child taking the silver medal with a 55.02 time.

"To God be the glory, I have been fourth so many times, I just came out here with that behind me and focusing on my technique, focusing on what I trained for and determined to go out there and run," said the many-time Diamond League series winner, who broke her medal drought at this year's IAAF World Indoor Championships, where she won silver in the 400m.

It was in 2006 at the IAAF World Junior Championships in Beijing, China where Spencer won her last gold medal - that was eight years ago when she was still a teenager.

It's been quite a wait and one filled with doubts about her mental fortitude at major championships, and while the Commonwealth Games title isn't the most glistening of them all, Spencer is extremely proud of her accomplishments and is looking to move on to even greater success.

"I feel relieved, I don't know if when I get back to the hotel, it will hit me that I am the Commonwealth Games champion and bring other emotions," Spencer said.

"I was doing this for me, I just wanted to ensure that I got a gold medal. World Indoors was great and a breakthrough for me, so I knew that, coming here, I would be victorious," Spencer beamed, already looking forward to bigger targets.

"Next year is the World Championships, so I'm focused on going back, continuing to work hard and I know I will have success there as well," Spencer added.

Spencer also heaped praises on Russell, who was competing in her first major senior championships.

"I'm very happy for her, she has trained hard, she trains with me, so I knew what she was capable of doing. She came here and got a medal, so I'm happy for her," said Spencer.